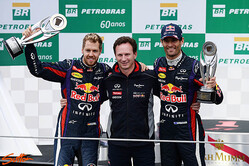 Last week Ferrari's infamous Horse Whisperer reappeared with a small article that left many scratching their heads in confusion.

The piece was entitled 'Slow on the uptake with summer blunders' and it stated that "when the championship finishes, the moment arrives to take stock. If it's enough in sport to look at the points standings, in business some trust in summer valuations, even if they are carried out under a parasol. For that reason, months later, a reconstruction of the budgets of Formula 1 teams developed by an Autosport colleague has transformed itself into journalistic fact. It's a pity that the cited figures are largely fantasy and they can draw even distinguished newspapers into conclusions that are wildly erroneous."

When Pitpass editor Chris Balfe saw the Horse Whisperer's piece he asked business editor Christian Sylt to see what all the fuss was about. He soon found follow-up reports saying that the Autosport article in question was called 'The true cost of Formula 1' and was published in print and on its website on 31 August. It fits Ferrari's description as the article does indeed contain a reconstruction of F1 team budgets and was written several months ago. It claimed that Ferrari has a budget of £250m including engines and although the Italian manufacturer suggests that this is wrong, it is nothing compared to the error that the article makes about this year's champions Red Bull Racing.

Austrian energy drinks company Red Bull owns two F1 teams and they are run by completely different companies. Italian company Scuderia Toro Rosso SpA runs Toro Rosso whilst its flagship team, Red Bull Racing, is run by two UK companies. The author of the Autosport article has read their financial statements, which have been lodged with the UK authority Companies House, however he does not seem to have understood them.

RBT is the highest-level company involved with Red Bull Racing within Red Bull itself. We know this because the financial statements show that 100% of the shares in RBT are owned by Red Bull GmbH which is the actual drinks company.

You don't have to be a financial genius to find the definition of consolidated in a financial context. Even a standard dictionary gives a pretty good indication. For example, the Oxford English Dictionary defines it as to "combine (a number of financial accounts or funds) into a single overall account or set of accounts: (as adjective consolidated)consolidated accounts."

As the turnover shown on RBT's financial statements is consolidated it already includes the turnover of RBR. Adding RBR's turnover to this again would be completely inaccurate as it would be duplicating it. However, this is precisely what is done by Autosport.

The reconstruction of Red Bull Racing's latest budget involves combining the 2011 turnover of RBR and RBT and then adding 10% for good measure. The article states that "Companies House records RBT's 2011 turnover as £215m (declared profits £4m), while RBR registered a bottom line of £640k on £177m spend. Adding 10 per cent for economics (2010/11 turnover increased by double that after RBR withdrew from FOTA/RRA activities) provides a global spend of £445m."

Most worrying of all is that Autosport then draws conclusions about the team's budget from this error. It claims that Red Bull Racing's "actual spend... lies between RBT's turnover and the total, pointing to £250m annually for the overall RBT/RBR F1 operation." Given that this is based on an error it is not surprising that the conclusion too is flawed. As previously stated, RBT is the highest-level company involved with Red Bull Racing within Red Bull itself. Accordingly, it is hard to see how Red Bull Racing's "actual spend" could be higher than that of RBT.

Sylt says that the catalogue of errors in the article did not surprise him. The author is an industrial engineer by training who later moved into journalism and at the same time set up a travel company offering trips to F1 races. Given the complexity of the subject it is no surprise that mistakes are made by writers who don't have a long track record purely writing about the business of F1. The error simply muddies the waters of reporting on the business of the sport and should really have been weeded out by Autosport's group F1 editor Jonathan Noble. Clearly it has gone too far when Ferrari itself has to step in.