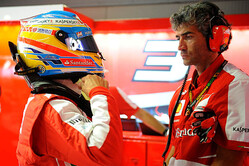 Fernando Alonso: "After the results of the last few Grands Prix, it's really good news to be back in the top three. Unfortunately, I didn't manage to get a perfect lap, because I went off the track at turn 4. I lost seven or eight tenths there and I think also second place on the time sheet, which I believe was within our grasp today. We know our car is more competitive in the wet and it's a shame that this year, it's only rained here, but now we have to look ahead and think about getting on the podium tomorrow, as if we were fighting for the World Championship, because it would be the best way to end the season. Here at Interlagos, you never get consistent conditions and we saw that again today, when we went from an extremely wet track to an almost dry one in ten minutes. That's why I expect a very hectic race in which we will have to pay maximum attention to not making any mistakes. It will also be necessary to have a perfect strategy and an ability to react very quickly."

Felipe Massa: "This qualifying session was made particularly complicated by the changing weather, because in the space of a few moments, it went from strong rain to suddenly stopping and everything in between happened! I am not happy with my lap, because believe me, I expected something better, but I lost time in the second and third sectors and on some parts of the track, I was aquaplaning and losing grip. I am disappointed to have lost a lot of places because of that, as I was aiming to start from further up the order, but now all we can do is think about having a good race. For tomorrow, they are predicting rain, but we must be ready for whatever conditions we get, because here you never know and we haven't done so much as a single lap on a dry track. Without a doubt it will be a very exciting race for us drivers and for the fans too: all the energy they exude will be an extra motivation for me to do well on what is a very important day."

Pat Fry: "That was a rather odd day, with most of the work concentrated into the afternoon. Because of rain in the morning free practice session, we decided to only do a double installation lap with the idea of saving as many sets of new tyres as possible for qualifying and the race. In such changeable weather and with so much water on the track, the best choice seemed to be not to take any risks, which turned out to be the right one, given the prolonged rain in the afternoon. In qualifying the main difficulty was interpreting the track conditions: in Q1, we immediately managed to set a good time on a set of intermediates, while in Q2 we used two sets of new intermediates. The worsening weather conditions delayed the start of Q3, where before going out on the last set of intermediates, we had to go out on the Extreme wets. I am pleased with the way the team worked in the pits, as regards delaying our drivers going out on track so that they ended up being the last to cross the line. Fernando got a good lap and I think tomorrow we can aim to finish on the podium. However, it was a shame for Felipe as he was unable to improve in the second and third sectors, but I am sure that in his final race with Ferrari, he will try and make up for it tomorrow in front of his home crowd. In the race it will be important to adapt as quickly as possible to the track conditions, which according to the forecast will be similar to today's, with a 30% chance of rain."