No penalty for Alonso 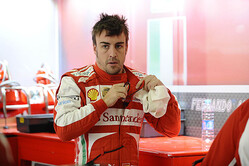 The Spaniard rejoined the track almost alongside Jean-Eric Vergne who was leading Felipe Massa at the time. As the two-time world champion headed towards T3, rather than falling behind the Toro Rosso he continued alongside it even though it meant he was outside the limits of the track.

A post-race investigation by the stewards accepted Alonso's claim that Vergne has left him no room and therefore no further action will be taken.

"While car no 3 (Alonso) did leave the track at Turn 3/4 the stewards believe that he had no choice, as car no 18 (Vergne) closed on him," read the official report.

"Car no 18 was at the end of his stint with worn tyres and was fully committed to the turn as car no 3 exited the pits. Telemetry confirms that car no 3 was significantly faster, on option tyres, and had the advantage throughout the sequence.

"The drivers' explanations were completely clear," the stewards concluded. "Therefore the stewards determine that neither car could avoid the incident, and no advantage was gained as a result of the incident."

Shortly after the incident Vergne himself stopped for fresh tyres, eventually finishing the race in 17th whilst Alonso finished fifth, posting the fastest lap of the race on the final lap.

"For a while now, if a driver puts a wheel outside the track when overtaking he gets a penalty," said Vergne, "and he had four wheels outside the line. In any case, he would have passed me down the next straight as I was struggling with my tyres by then."

Speaking before the stewards announced their decision, Alonso said: "The rule states that if you have an equal amount of car to the other one on the track then you can use all the space. But this was only one incident in a race which, for me, was fantastic."