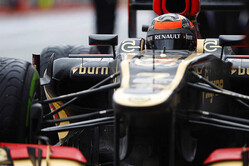 Kimi Raikkonen has been excluded from today's qualifying session after his car failed a post-session deflection test.

The Finn, who was driving the short wheelbase E21, did not comply with Article 3.17.5, an asymmetric LHS front floor deflection test, and was therefore excluded from the qualifying results. However, he will be allowed to start the race from the back of the grid.

The Stewards heard the explanation of the team that the relevant part broke upon contact with a kerb. However, they did not accept that the incident referred to constituted an accident, or excused failing the relevant test.

"The reason for the movement? A part which prevents the floor from moving broke after Kimi left the circuit at Turn 3 during qualifying," claimed Lotus following Raikkonen's exclusion.

"The team respects the Stewards' decision and will do everything in its power to ensure Kimi and the team gets the best result possible after starting from the back of the grid," said Eric Boullier. "No advantage was sought or gained in the incident and the relevant part has been replaced.

"We've seen what Kimi can do to work through the field when he needs to and we are going all out for the strongest result possible."

Ironically, the Finn, who yesterday threatened to boycott the two remaining races in a row over unpaid wages, was the winner here twelve months ago.