Raikkonen admits he considered staying away 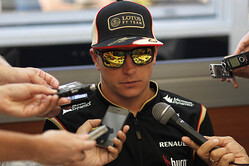 Kimi Raikkonen has admitted that his team's failure to pay him a single euro this season was the reason he was not present in Abu Dhabi on Thursday.

What many had been thinking was tonight actually confirmed when a stony-faced Raikkonen told Sky's F1 Show that he came very close to not turning up for this weekend's race.

Conspicuous by his absence on Thursday, many wondered if it was last weekend's radio spat with Alan Permane that lay behind the 'no show'. However, whilst admitting that being ordered to "get out of the f***ing way" did annoy him - and that he hasn't been treated in such a manner by any other team he has driven for - it is the Enstone outfit's failure to pay him that is grating.

Asked if he had considered not racing this weekend, the Finn replied "yes". When asked what caused him to change his mind, he continued, "certain things".

Asked if he'd been "talked to" by Ferrari or McLaren in the same manner as he was 'spoken' to by Permane, Raikkonen said: "Probably not. But that's not the reason why I wasn't here yesterday. It's part of it, but it's not a big part of it."

"There is nothing wrong," said a clearly under pressure Eric Boullier. "He was upset because of the comments made on the radio, which is normal, nothing to complain.

"It's no big story," he continued. "In the end it is just emotions. At the end of the race everybody had stress, the context was difficult because from third and fourth we could have ended up nowhere. It was a bit harsh but we apologised for this. That's the end of the story.

When asked if Raikkonen is on talking terms with him and Permane, Boullier nodded and said "he's smiling", adding "there is no story".

When told that Boullier had admitted that he has not been paid up to date, Raikkonen smiled and replied: "Let's put it this way, I haven't been paid a single euro this year. It's an unfortunate thing and I understand the team's side of it but sometimes when you are put in a position and told different stories and people think you don't work for the team or don't care what happens then this is not exactly true when I'm doing it without being paid."

In a subsequent interview, Raikkonen admitted that it is entirely possible that he might boycott the remaining races in the United States and Brazil.

Asked whether he is considering not racing he told reporters: "For sure. I enjoy racing, I enjoy driving, but a big part of it is business and sometimes when that is not dealt with like it should be, we end up in an unfortunate situation like this. You have to put the line somewhere and if it goes over that it is not really my fault any more."

All of which puts Gerard Lopez' puff piece yesterday fully in perspective.