Kimi is a 'no show' on Thursday 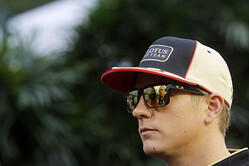 It was a case of 'where's Kimi?' on Thursday in Abu Dhabi as Kimi Raikkonen was conspicuous by his absence.

With talk of the relationship between the Finn and his team having broken down ever since it was announced he was heading to Ferrari, things took a distinct turn for the worse in India.

As the Iceman, already struggling with his tyres, found himself under attack from teammate Romain Grosjean, trackside operations director Alan Perman was heard to tell the Finn to "move out of the f***ing way", to which the retort was "don't f****ing shout at me".

When Raikkonen didn't appear in the paddock today speculation spread like wildfire, and suddenly - not for the first time - the Enstone outfit's humorous approach to social media came back to bite it.

Suddenly, the team that had featured a #where'sroscoe hashtag during the summer, a reference to Leeis Hamilton's dog, found itself the subject of a #where'skimi campaign.

Though the team insists that all is well and that the Finn is en route to Abu Dhabi and will arrive in good time for the start of the track activity on Friday, it should be noted that fellow-Finn Mika Hakkinen took to the media on Thursday to complain about the way Raikkonen has been treated by his team, describing Permane's public outburst as disrespectful.