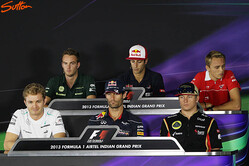 I'm going to start with a question for Nico, Mark and Kimi, as, with all due respect to our back row, I think you three gentlemen are best placed to challenge Sebastian Vettel for victory this weekend. He's won the last five races, he's won both Indian Grand Prix from pole position and he's led every lap as well. Simple question Nico: how do you beat a man in such form?
Nico Rosberg: Well, I'm here to do that, that's for sure and the last couple of races have not really gone to plan, a lot of bad luck also. But, I have a very good car at the moment. I think the Red Bull is a bit quicker than us but you never know, you know. If we really get everything right on a weekend like here in India then it's possible to beat Mark and Sebastian in that car. That's what I'm here to do, so I'll give it everything and we'll see.

What about you Kimi? What have you got up your sleeve?
Kimi Raikkonen: I think I have to do a bit better in qualifying. That would help a lot. That would give ourselves a good chance then to try to beat them. It's not just only them though, so we'll see what happens here.

It's tricky Mark, you were on pole in Japan, it didn't quite work out in the race, but what's the secret? Can Sebastian be beaten?
Mark Webber: He's on a phenomenal run obviously and as you said his stats here in the last few years he's been pretty strong. It needs a perfect weekend - pole, perfect race, perfect strategy, perfect everything to obviously put him off the top step, so that's got to be the plan.

I wish you all perfection this weekend. Back to you in a few moments. Max, if I can turn to you next. Japan, your fastest qualifying lap there beat both Caterhams and your team-mate Jules Bianchi. Was that your lap of the season?
Max Chilton: It was one of them. Obviously, it was a bit of a standout performance because we managed to out-qualify both Caterhams and Jules, but I've had good laps in the year and I've been very happy with certain laps but in Japan we just managed to get things right. It was a bit of a manic last lap and I managed to just get enough space and just got the most out of the car and the car performed well. As Nico said earlier, if you get everything right then you get good performances.

I'll ask Giedo about the perspective from the Caterham side of things but Marussia are still hanging on to 10th place in the Constructors' Championship with four races to go. It's vitally important, financially, for a team to finish in that 10th spot not 11th, so how are things? Nervy, tense, determined, excited?
MC: It's definitely tense but I believe that when you're passionate and working on the best result possible, you get the best out of yourself and the team. At the moment we're doing that. It's definitely going to be tight but we've got 10th at the moment and we're hoping to keep it that way until the end of the season.

What about from the Caterham side, Giedo? Anything can happen I'm sure in the last four races but is there extra pressure given that you're not the team in 10th at the moment?
Giedo Van der Garde: Yeah, a little bit. Of course for us it's very important to get the 10th place back. I think the last few races we've seen that we've always been in front in the race compared with Marussia, so the one thing we need is a little luck and the only thing we can do is maximise ourselves, maximise the car, maximise the team and the rest is luck.

Well, good luck with the luck if it comes your way. Daniel, it's been a few weeks since you were announced as a Red Bull driver for next year and you've had time to come to terms with that announcement. How has life changed? Has the attention grown race by race?
Daniel Ricciardo: No, not really. I think around the time of the announcement it was pretty hectic with the media and everything but it's nicely calmed down now. It's good. I'm sure once I hop in the car next year it will probably rise again but it's been a quiet few weeks. I had a bit of time to myself, which is good.

Have you started to focus on what you need to do next year against a man who is likely to be a four-time world champion, or is the focus still on this season? How do you cope with that?
DR: Definitely still my main focus is on this year. Obviously aware of the competition I'll be up against next year and slowly employing a few things to help me out for January and to settle in with the team but yeah, still very much focussed on the rest of the year with Toro Rosso. I guess once the season's over after Brazil I'll make the conversion, start getting in the simulator and trying to figure out what makes Seb so quick and try to learn quickly.

Nico, this morning, tell us about your bus journey into the track. Kind of a special bus ride with some under-privileged children, stepping out of the Formula One bubble for a moment.
NR: Yeah, it's nice. I'm involved in the Laureas Sport for Good programme, so this morning I took a bus journey to the track with a whole bunch of children from the local community. In the end just trying to be a little bit of an inspiration to them, to show how good sport is for personal development really, to learn about discipline and to learn to be with people and respect other people and things like that. Also, to show them the importance of education. That was the aim - but they also had a great time. We had a good time, we played a bit of soccer together, and showed them the racing car. So, that's good, yeah, a very nice programme.

Brings you down to Earth a little bit, I suppose?
NR: Yeah.

Kimi, this is your second year coming to race in India. Do you notice the popularity that you have? Does it spur you on when you get to the track? Does it give you extra motivation?
KR: I think it's very nice to have it but I mean I've only really seen the hotel this morning, from the airport to the hotel, and the circuit. So, especially today there were not many people when we came here - so I feel it less than at many other places but I'm happy that there are fans here. This circuit is nice and hopefully we can have a good weekend for all of them.