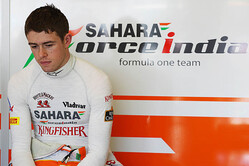 Paul di Resta's manager, Richard Goddard, has admitted his concern at the Scot's future fearing that teams are now focussing on pay drivers.

It wasn't that long ago that di Resta was being linked with the likes of Mercedes and Ferrari however, following a run of poor results, not helped by the mid-season change to tyre compounds, the 27-year-old is struggling to keep his seat at Force India.

"It's difficult to know what will happen next year," admitted Goddard, according to the Guardian. "There are a lot of drivers in the sport with money and there are a lot of teams that need money. That is probably the biggest issue, that it is not just outright talent that gets you a seat in the car any more.

"But Force India have always been very fair in that they have tended to put outright talent in the car and they haven't looked to a driver to bring in income, which is grea," he continued. "That's because they are well funded by a couple of individuals and corporations who are able to do that, and hopefully they will carry on doing that. Some other teams are looking for drivers to bring in income, and unfortunately Paul doesn't have a government-backed scheme or a rich billionaire standing behind him."

In recent weeks there has been talk of Nico Hulkenberg returning to the team he only left a year ago, though the smart money appears to be on the highly-talented German joining Romain Grosjean at Lotus.

Either way, di Resta really needs some decent results in the remaining races if he is to keep his seat. However, adding to his frustration is the fact that the Silverstone based outfit is traditionally late in naming its line-up, which means if he isn't retained by the time the Scot finds out all the remaining decent seats will already be filled.

"It is a tricky situation to be in," admits Goddard. "We're still under option. We haven't been told we're not going to be signed. But if the option lapses and doesn't get taken up, then it is a case of waiting to see if Force India come back to us and negotiate on a new basis.

"It's difficult to determine because this last half of the season he has been adversely affected by the tyres. He hasn't produced the results he would want to produce, but overall it is the team under-delivering on what it should have delivered. The team is probably fairly disappointed at where it is because it started the season so well."