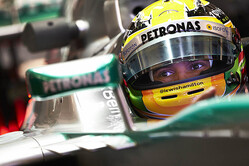 Speaking in the wake of the Korean Grand Prix, in which he finished fifth, the Mercedes driver told reporters that the championship is now a formality.

"He has won already,” said the Englishman, “unless he doesn’t finish the rest of the races, and even if he doesn’t he has probably still won it.

“Personally I feel for the fans," he continued, "because I remember the period of time when Michael Schumacher was winning. I remember waking up in the morning to watch the start of the race and then going to sleep, and then waking up when it ended because I already knew what would happen. I am pretty sure a lot of people were doing that today, at least in my family there is.”

Of course, Hamilton's comments come off the back of a four-win streak for Vettel, two of those wins coming on circuits where the Red Bull is not traditionally at ease. Furthermore, all the signs were that Mercedes would be giving the German a harder time this weekend, losing out in qualifying by just 0.2s.

Yesterday was the fourteenth race of the season, by the midway point (of those fourteen), Canada, Vettel had won three races, compared with Alonso's two and wins for both Raikkonen and Nico Rosberg, Hamilton's Mercedes teammate. Of the next three races, Vettel won one, with Rosberg and Hamilton each taking a win... then came Belgium and the ‘run of four’.

Thus far, Vettel has won seven races, and whilst there are five still remaining - which he could well win - let's not forget that there have been previous seasons in which one driver has pretty much dominated, and not just Schumacher.

As recently as 2009, Jenson Button won six of the first seven races, eventually taking the title by 11 points from (guess who) Vettel. The difference is that after that sixth win, Button didn't win any more races.

His driving didn't deteriorate, rather the opposition raised its game, Red Bull refusing to give up on the title(s) until the very end.

With teams now switching to 2014, yet Red Bull still bringing updates, the Austrian outfit looks to be heading towards its fourth title.

Meanwhile, despite the promise shown on Friday, and again on Saturday, Hamilton was led home yesterday by a driver whose future is in doubt due to one of the more ludicrous aspects of our sport - the 2014 weight rules - driving for a team that a few short weeks ago was said to be in such a financial state that it might not see out the season.

Due to a stoic refusal to give in, and a determination to improve rather than moan about the situation, Sauber is now hunting down Force India for sixth in the championship.

It is not up to Vettel and Red Bull to stop and say 'hey guys, sorry about that, you take the flag for a change', it is up to the opposition to raise its game.

It's the constant moaning that truly induces sleep.