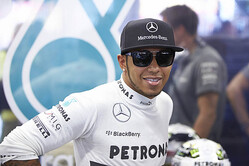 Drivers are unhappy as new rules for 2014 will disadvantage 'bigger' drivers and could lead to a grid filled with 'jockeys'.

Though the minimum weight limit rises to 690kg (from 642kg), the heavier turbo engines mean that weight will have to be trimmed elsewhere. This has led to fears that teams, already struggling to meet the weight restrictions, will look to drivers in their efforts to 'trim the fat'.

It is thought that the ideal weight for drivers will be 65kg, the average of the 2013 grid being 68.32. While this is no problem for smaller drivers such as Massa, Gutierrez, Vettel, Maldonado, Raikkonen, Chilton and Pic, those at the other end of the scale, including Hulkenberg, Button, Sutil, di Resta, Rosberg and Hamilton are worried.

"Everybody's been asking me why I look so skinny but you have to be skinny because it's to your advantage to be as light as possible," Webber, who is leaving F1 for Sports Cars, told reporters. "It's a car performance advantage.

"The lighter drivers should be pushing as well," he added, "but they don't because obviously it's nice for them."

"I'm 74 - 74.5 kilos with my kit, and even I struggle to make the weight limit," admitted Jenson Button. "I have done for the last three years.

"It does hurt the heavier driver, and it's very unfair to say 'lose weight' because some of us can't lose any more," he admitted. "You need to have skin on your bones, and a little bit of muscle to drive a Formula One car, so it is unfair.

"They are always trying to push the boundaries but in terms of weight limit, I can't see a reason why we can't put the weight limit up by 10 kilos," he continued. "It wouldn't penalise half of the grid next season. It's one of the easiest things to put right - it could save a driver's career, or make a driver's career."

The drivers are to hold a meeting today ahead of their 'union', the Grand Prix Drivers' Association, calling on the sport's powers that be to look at the situation.

In a worrying turn, Lewis Hamilton admitted that the only way he could get his weight any lower would be to "chop his own nuts off".