Tombazis: Tyres not entirely to blame 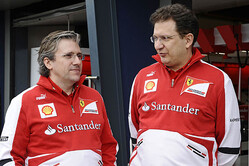 Ferrari's chief designer, Nikolas Tombazis, says it would be wrong to put the team's performance slump wholly down to the changes to the Pirelli tyres.

The change to the tyres, that followed the controversial British Grand Prix, have seen some teams lose out whilst others have appeared to gain, Red Bull barely missing a beat.

However, Tombazis insists that his team's recent drop-off is not entirely due to the construction changes made by Pirelli.

"It would be somewhat superficial to blame the tyres as the only reason for our decrease in performance," he told his team's website. "We also took some development steps that were not as strong and didn't work.

"Wind tunnel technology has been a weak point for us, compared to our competitors," he continued. "We had some problems with our flow quality so it was not as uniform as it should be and we could not run as big a model as we would have liked. Our data and instrumentation was quite outdated so we couldn't do that many runs and experiments per day, which was a bit of a drawback. The past months we spent updating it have addressed all these problems. Therefore I am optimistic that, on this front, when we are fully up and running we will not be in deficit to our competitors."

While most have already switched attention to 2014, Ferrari still holds out hope for 2013 and as a result the updates keep coming, indeed, a few of them will probably find their way on to the F138's successor.

"Our efforts will be partly aimed at continuing to understand better the tyres and tyre management, which might see some improvement compared to our competitors," says the Greek. "And we are bringing small aero updates. One should not expect these to dramatically affect the final result but we feel they will bring some improvement."

"We've still got some developments coming through for the next few races and we will be running and testing them to continue to try and improve the car," adds engineering director Pat Fry. "For 2014, because of the much larger changes to the cars on the engine side and also the aero aspect, it's naturally much harder to test components now, but there will be some small development bits we can run during this year's remaining free practice, looking more on the reliability front than anything else, which means we have busy Fridays planned for the next six races."

"The changes aerodynamically are quite significant and in some key areas this involves reviewing our design completely," says Tombazis, looking ahead to 2014. "The front wing is designed to a different set of rules, the rear wing too and the elimination of the exhaust effect is also very significant. Furthermore, when it comes to interacting with the engine, cooling is very important and to get it right is very critical.

"All these factors mean the 2014 car will be very different, but we cannot claim it is starting from zero or from a clean sheet of paper, as you have to use your knowledge and experience from the past to design the car. This means there are areas where we feel we have to catch up with our competitors and others where indeed we are all starting from zero."

"Aerodynamically the visual changes will be relatively small," says Fry, "with the front wing getting narrower and the lower rear wing disappearing. I guess the body shapes will change slightly because of the exhaust positions moving and that has a significant impact on the aero performance side of the car. So in performance terms it's quite a dramatic change, but visually, the cars will look quite similar to the current ones."

The 2014 car will be the first produced under the Maranello outfit's new organisational structure.

"For about a year and a half, we have been organised in a different way, with two deputy chief designers each looking at the projects for alternate years," says Tombazis. "Fabio Montechi is the guy following the 2014 project, as Deputy Chief Designer, so he and I work very closely together. On the aerodynamic side, we've had a team working on the 2014 car for a year or so. Now we have reinforced that team with people who previously had worked on development of this year's car whose focus has shifted to 2014 and therefore, the numbers working on next year's car have increased dramatically.

The reorganisation sees the return of James Allison to Maranello in the role of Technical Director. "I've known James since 1994 and it will be our third time working together," says Tombazis, "once at Benetton and previously at Ferrari in the early 2000s.

"He's an excellent person technically and a good guy too. Together with Pat the two of them provide strong leadership: he brings a lot of knowledge, experience and capability to the team, making it stronger."