Behind the algorithms and simulations 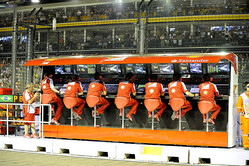 In the concluding part of our insight into Ferrari's Strategic Operations, Neil Martin explains how a working group has been built up that is able to maximize the opportunities that can arise during a race and, at the same time, minimize the risks. All this while bearing in mind that not everything is predictable or quantifiable, because if it was, Formula One would not be a sport.

Neil studied Pure Mathematics at university, but as a student was already a keen fan of F1. "Having finished my degree in Mathematics and Computer Studies, I began a Science Masters in operational research from 1994 - 1995 in which I had to apply these techniques to a real case," he tells the team's website. "As I really liked Formula 1, I asked my supervisor, if I found a team as a sponsor, if the planning of race strategy could be considered a sufficiently complex problem from a mathematical point of view. The answer was yes and so I wrote to several teams, getting a positive response from McLaren. They would give me some printed information relating to the races and I had to compile by hand forms showing all the laps completed by every car in every session, split into various sectors: at the time, OCR was not very precise and there were more downsides in terms of errors than benefits from using it.

"I remember I had produced a module from which it could be deduced that the teams were stopping too early to refuel, losing the opportunity to refuel for nothing at the start of the race, as no time was lost filling the tank. Once it was possible to demonstrate, using just pre Grand Prix data that the McLaren could have made just a single stop, something that was only realised once the race was over: so they were keenly interested in my research and, once I'd completed my masters, a handful of collaboration contracts were drawn up and I was taken on by the team in October 1995."

The first algorithms were based on data relative to just one car, at a given track with parameters linked to the weight effect and fuel load, needed at the time for refuelling and for the operations during the pit stop, as well as time lost driving down pit lane and those linked to tyre degradation. Essentially, this served to come up with a simple answer: come the end of the race, is strategy A quicker than strategy B.

"It was an application which worked on a computer not linked to the network and was activated by the race engineers prior to the race," Martin continues. "After that, various new elements were introduced but the change came with the Monaco techniques used as from 1998. It allowed to take into account all the cars in the race, traffic models, neutralisations, overtakes and other incidental events.

"The results were interesting, because when you are dealing with probabilities, you come up with things like 'if we chose a two stop strategy we have a 20% chance of coming first or second, but if we get stuck in traffic then there is the same chance of finishing seventh or worse: if however we go for one stop, then very probably, we will finish third or fourth but it will be equally difficult to win or finish the race seventh or lower.' For the first time, simulation allowed for visualization of the risks associated with each option and therefore, you could take into account the team's acceptance of certain risks. It was a considerable step forward even it meant the cards were jumbled up a bit. Before that, engineers had in front of them the confirmation that a single stop strategy was quicker than a two stop; concise if rather simple.

"Up until then, development was carried out entirely off-line and the analysis done before the race: we did not have data that could automatically be inserted in real time, we had to bash the keys entering the gaps between the cars we were interested in, lap after lap to understand if we were ahead or behind our predictions," he reveals. "When the engineers working at the track asked to have someone with them during a race weekend, I had written so much of the software that I was the obvious choice.

"In 1999, there was no direct communication between the pit wall and the garage and so you had to shuttle to and fro with the sheets in your hand to try and explain by shouting into the ears of those in charge, telling them what you thought they should do. Fortunately, over time, the tools were improved and all the computers were linked and the situation got better but the real step forward came in 2001, when for the first time, FOM supplied the data from all cars in electronic format in real time, which allowed us to tackle strategy management during the race in a much more efficient manner. Also, the monitors are always improving and so its possible to run Monaco simulations to answer questions such as 'given the situation on this current lap, what is the best thing to do if our main competitors decide to make three stops?' or 'what is the best strategy that our opponents might choose?' The next step was being able to work from the factory, in a control room which we call the Remote Garage, where people can monitor various aspects of the car's performance, while being in direct communication with the race track via intercom. From here, the amount of data available has increased, just as the reliability of the models has improved and this whole sector has grown in an organic manner."

Martin became well known to the general public in 2005, when a strategy he sent via email to the McLaren pit-wall resulted in Kimi Raikkonen winning the Monaco Grand Prix. "Honestly, I only found out about it on the Monday, when a friend in the team told me I was in the Daily Telegraph. I thought it was a joke but mid-morning, I got myself a copy of the paper on my desk. I was surprised because nothing had happened that was different to what I had been doing week in week out for the four previous years! The way it was all described also made me smile: it's true that some things were correct, but let's say their version of events was different to the way I remembered it!"

At Maranello, Neil doesn't only work on strategy: "Today, I'm in charge of a group of engineers who act in a certain sense as consultants to the whole team. It's a well balanced mix between mathematical modelling and software engineering: we try to look at every area of activity, trying to give support where possible, through observation of the processes, trying to typify them in models and, when possible, optimizing them or introducing further elements of understanding, of management or software which can definitely bring improvements."

Algorithms, Monaco simulations, remote garage; all elements that make strategy decisions ever more logical: to underpin them, to use to explain things in hindsight. The truth is however, that Formula 1 is still a sport and, as such, the mistaken choices are better remembered than the right ones, even more so if those making the decisions are sitting on a glorious and yet sometimes uncomfortable pit perch.