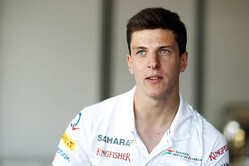 James Calado is to replace Paul di Resta in the opening practice session at the Buddh International Circuit after the Scot was taken ill.

The Silverstone-based outfit revealed the move via Twitter, posting: "FP1 will see @JamesCalado make one of his Friday appearances. He will sub for Paul, who will be back in the car for FP2."

It's understood that di Resta, who was at the track today taking part in the track walk and team press conference, has fallen to 'Delhi Belly'

The Scot, who finished just outside the points in Japan following a run of four non-points scoring outings, has yet to secure a seat for 2014 though he is widely tipped to be staying at Force India.

Calado made his debut with the team at Monza, subsequently taking part in FP1 in Korea also.