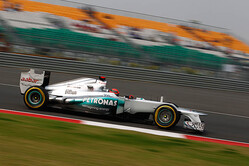 Vicky Chandhok, the head of Indian motorsport, fears that this year's Grand Prix could be the last in the country.

After just three race - including this weekend's - India drops off the calendar in 2014, hopefully to return in 2015. However, Chandhok fears that this year's race will be the last.

While the circuit has proved popular with drivers, fans are not so sure, certainly the locals, a situation not helped by the country's economic decline. An already overcrowded calendar raised the prospect of India holding its 2014 race in March, just five months after this weekend's event, consequently the decision was taken to skip a year. However, Chandhok fears his country's absence from the calendar might be more permanent.

"If it doesn't come back in 2015 it may never come back at all," he told the Guardian. "That is my concern. Once you lose a race it can be gone for ever. That is why I am calling on everyone in India to make this Sunday's race an event to remember, so everyone in Formula One will realise that it needs the Indian Grand Prix.

"If we lose it, I would be very disappointed, because it took us ten years to get the race in the first place," he admitted. "It was in 1999 that Bernie Ecclestone first had talks with organisers and sponsors in India."

Explaining the event's absence from the 2014 schedule, he said: "Basically, there were two reasons. First, Bernie wanted to switch the race to March but there was no way we could stage two races in five months. Second, everything has become a lot more expensive.

"This race has been good for the economy for the past two years. Hotels and taxi drivers have been busy, and so have other workers. The taxpayers have not been paying for it – it has been a private promoter.

"India is now recognised worldwide as making great technological advances. So F1 makes sense. It is more than just a sporting occasion. It is an event capable of encouraging people all over the world. It is good for India, and good for its government."

Promoters Jaypee Sports are understood to have taken a major hit, however, it is surprising to hear Chandhok echo the call usually heard in Europe. "The government should take a look," he says, "because the Indian Grand Prix is good for the country and is now a wonderful facility."