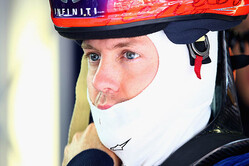 Tyres options this weekend are the same as used last week in India, medium (prime) and soft (option).

There are two DRS zones, the first on the straight that links T7 and T8 and the second between T10 and T11.

Sebastian Vettel led a Red Bull 1-2 in FP2 while the morning's pace-setter, Romain Grosjean, lost track time first due to a brake issue and subsequently a vibration. That said, Lotus is looking strong here and barring anything untoward - such as Kimi Raikkonen going on strike - should be well placed to challenge for second in the Constructors' Championship.

Despite complaints over handling, McLaren is also looking strong, not so Ferrari which is clearly struggling for grip here.

McLaren clearly fancies its chances here, not of a win, but a decent points haul and possibly even a podium.

The traction demands here should suit Sauber but with Nico Hulkenberg feeling a little under the weather we have yet to see the best of the ever-improving Swiss team this weekend.

The lights go green and the Lotus duo lead the way followed by Chilton, Gutierrez, Bianchi, Ricciardo, Vergne and Maldonado. Vettel is another early riser - albeit being 14.00 (local time).

Within the first few minutes all but the Force Indias and Caterhams have made an appearance.

Once he does take to the track, Pic misses the apex at T6 and take a bumpy ride over the kerbs. Asked about track conditions compared to yesterday, Perez says it is "much hotter".

Fourteen minutes in and Raikkonen posts the first serious time, the Iceman stopping the clock at 45.026. Sutil goes sixth (49.633) and di Resta seventh.

More and more drivers take to the track including Vettel who goes quickest in S1. As di Resta improves to second (45.628), Vettel goes quickest in S2. The German maintains the pace in S3 crossing the line at 44.117 to go quickest.

As Chilton destroys a bollard on the apex of T1 it's worth noting that the stewards have warned the drivers not to use the run offs at the final corner (T21) in order to gain an advantage.

"The car is undriveable," complains Sutil, "it is oversteering all over the place."

The Mercedes duo, along with Button and Hulkenberg, get to work, as Bottas goes fourth ahead of Vergne, Maldonado and di Resta.

Despite going quickest in S2, Maldonado loses time in the notorious S3, running wide in T20, and consequently fails to improve. Mistakes also for Grosjean and Hamilton.

Gutierrez goes quickest in S2 and subsequently improves to 8th, only to be demoted when Hamilton goes second with a 43.872. moment later, Hulkenberg goes seventh with a 44.765, the German also very strong in S2.

"The car is so bad," complains Sutil (again), "I've got everything, oversteer, understeer, everything". The German is currently 15th.

No such problems, on the face of it, for countryman Rosberg, who goes quickest with a 43.784. That said, Vettel maintains the status quo with a 43.541.