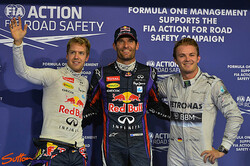 Tyre options this weekend are the same as used last week in India, medium (prime) and soft (option).

There are two DRS zones, the first on the straight that links T7 and T8 and the second between T10 and T11.

As in FP2, earlier today we saw Sebastian Vettel lead a Red Bull, a scene we have witnessed so many times this year. However, whereas yesterday it was Lotus that kept the Austrian outfit honest this morning it was Mercedes that put Sebastian and Mark under pressure.

That said, Vettel insists that his main threat this weekend, other than his teammate, comes from Lotus.

The big surprise thus far has been the poor form of Ferrari. Having already been leapfrogged by Mercedes, the Italian team is now under pressure from Lotus. Remember, whilst it is the Drivers' Championship which carries the kudos and the glamour, it is the constructors' Championship that decides the all-important prize money share-out.

However, it isn't the financial hit that will concern Ferrari so much as the loss of face in being beaten not only by a "drinks company" but Mercedes and Fake Lotus.

Having been fairly quiet yesterday, this morning Sauber upped its game. With strong traction an absolute must here, the ever-improving Swiss outfit is fancied to do well and further close the gap to Force India.

Another team looking stronger this weekend is McLaren, though Perez missed much of this morning's running.

In the four previous runnings of the Abu Dhabi Grand Prix, nobody other than Vettel or Hamilton has taken pole here.

The lights go green and Hulkenberg is first out followed by di Resta and Bianchi. The Frenchman takes a five place grid penalty after the team opted to change his gearbox following this morning's off.

As Hulkenberg begins his flying lap, all but Vettel, Webber and Alonso are on track.

Off the first batch, Chilton (44.974) goes quickest - quicker than Hulkenberg - but soon drops down the sheets as Gutierrez, Vergne and Rosberg all go quicker. As Hamilton goes second (42.573) there is a question mark against Rosberg's time as he appeared to have all four wheel off the track at times particularly T21.

As Raikkonen goes third, ahead of Hulkenberg and Button, Hamilton says that he will need to change his helmet/visor at the end of Q1. It could well be the diminishing light which is causing him problems.

Massa goes 13th as teammate Alonso begins his first flying lap. The Spaniard goes third with a 43.245 but he had to work hard.

A 42.890 sees Perez go third, the Mexican, like Rosberg, appearing to use all the track and then some. Elsewhere, Button runs wide in T9 and Maldonado at T20.

As Button goes third (42.609), Alonso has already dropped to twelfth, however, another strong lap sees him improve to third and demote the McLaren driver.

At 7:40, both Red Bulls leave the garage, both of them sporting options tyres, a move, as seen in India, which will cause problems for their rivals, especially those who thought they had done enough.

Hamilton goes quickest (42.231) as Massa, along with Grosjean, is down in the drop zone with the usual suspects.