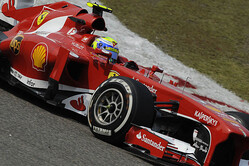 Felipe Massa is angry at the penalty meted out by the Interlagos stewards, a penalty which may have cost him a podium in his final race for Ferrari.

The Brazilian was running fourth, behind his Ferrari teammate Fernando Alonso, when he was handed a drive-through penalty for crossing the white line at the pit lane entrance, a breach of Appendix L, Chapter IV, Article 4 (d) of the FIA International Sporting Code.

On hearing the stewards decision he shouted "unbelievable, unacceptable," over the team radio, and as he served the penalty shook his fist in obvious frustration, his anger echoed by the partisan crowd.

"I'm really disappointed," he said after the race. "For sure they didn't do the right thing. If you really need to do that, you need to penalize everybody who passed there, not just me. It's really unacceptable and I feel sorry because the race could have been completely different."

His misery was compounded because Alonso, who finished third, had apparently intended allowing his teammate to pass in the final stages of the race, thus handing him a podium finish in his final outing for the Maranello outfit.

"He just came to say wherever you are behind me, I let you by," revealed Massa, who after eight seasons with Ferrari is heading to Williams to partner Valtteri Bottas.

It was at Interlagos in 2008 that Massa was world champion for 38.907 seconds, Lewis Hamilton famously taking the crown when he passed Timo Glock in the final corner of the last lap.

Note: If a post-race press release from Pirelli had proved accurate the Brazilian might have been in for even more pain. The tyre manufacturer's breakdown of what compounds each driver had used showed Massa as using three sets of options (all new). When this was pointed out by Pitpass, it was confirmed that it was an error and the Brazilian had in fact finished the race on a set of primes. Phew!