New Jersey... it aint just about the money 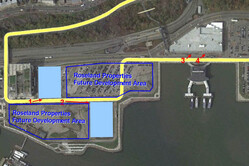 As New Jersey looks set to be dropped from the calendar once again, some say it's all down to lack of funding, that isn't strictly so...

While, as Pitpass has consistently reported, Leo Hindery and his team are struggling to come up with the $100m plus needed to host the race, the very circuit being proposed for the event doesn't strand up to scrutiny.

The yellow line here represents the latest track design by Tilke GmbH & Co as depicted in images released to the public by the promoter. The areas bounded in blue show developments under construction by Roseland Properties and Lennar Corporation

Picture 1 was taken standing in the middle of what would be the track between Turns 2 and 3 looking north. The picture clearly shows the first of three apartment buildings under construction by Roseland Properties.

Picture 2 was taken standing in the middle of what would be the track between Turns 2 and 3 looking north. The picture clearly shows the first of five condominium buildings under construction by Lennar Corporation.

Lennar Corporation's projects are scheduled to be built over the next several years and completed long before the promoter's "15-year" contract with Formula One. Development of these projects would remove the area for use for grandstands and hospitality facilities.

These pictures also show that the existing roadway in this area (as it is throughout Port Imperial) is bordered by Belgian block curbing. The picture also shows existing street lighting, storm drainage inlets, sidewalks. All of these improvements were previously approved by the municipality following public hearings. These improvements cannot be removed or relocated without amendment of the prior zoning approval and only after further public hearings.

To our knowledge there have been no such public hearings and recent requests for information under the NJ Freedom of Information Act do not show that an application to remove or relocate existing improvements has been submitted by the promoter or anyone else.

In addition, the Tilke design would require placement of barriers along the roadway in such a way as to completely block access to the Lennar Corporation buildings. There is no alternative access.

Picture 3 shows the recently-completed multi-level parking garage developed by Roseland Properties (note the sign at the top of the face of the garage). This is not a purpose built Formula One garage and, according to our sources, was not built by the promoter as has been claimed in the media.

Picture 4 shows the lobby entrance to elevators used by commuters to get to and from the cars parked in the garage. In addition, the picture shows the glass front of what are planned to be retail shops. The internal space is 28 feet in depth and therefore wholly inadequate for F1 garages. Furthermore, the race would mean 'evicting' retail tenants each year in order to accommodate the promoter. This is highly unlikely to happen.

Pictures 3 and 4 also show kerbing, pavements, landscaping, street lighting, storm drainage inlets and other improvements which would have to be removed in order to allow a race to be run.

In addition, opposite the parking garage is the 30 foot wide sidewalk which is part of the Hudson River Waterfront Walkway. The Walkway was developed under the Public Trust Doctrine. Public access 24/7 is protected by regulation and by order of the United States District Court. The promoter has proposed removing the Walkway with no apparent public notice or hearing.

The distance between the kerb of the Walkway and the front of the parking garage is approximately 65 feet which is insufficient to construct a start/finish straight to F1 standards plus signalling area and pit lane.

The promoter's own application to the US Army Corps of Engineers for permission to build temporary barge-like structure in the Hudson River on either side of the Port Imperial Ferry Terminal candidly admits that if the Hudson River Waterfront Walkway is not removed no race can be run. To our knowledge the promoter does not have approval to remove the Walkway.

While enquiries to Roseland Properties and Lennar Corporation were not returned, the Director of Race Communications for GP America assured us that "all construction work for the course has been appropriately permitted per state and local requirements".

When asked for evidence, rather than providing copies of permits that GPA claims have been issued, we were advised: "If you're looking for a specific permit, the relevant agency should be able to provide it for you".

We are on the case.