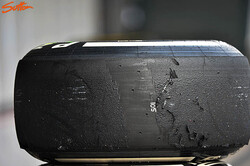 Pirelli has safety concerns over its tyres ahead of today's Indian Grand Prix, prompting it to ask teams not to push them too hard.

Drivers have experienced blistering within just a handful of laps throughout the weekend, not to mention significant tyre wear, on the soft compound. It has led to a dramatic impact lap time, prompting Pirelli to recommend teams restrict running on the soft tyre to 15 laps and the medium (prime) to just 35.

The FIA will not enforce Pirelli's suggestion as it feels doing so unfairly penalises drivers and teams which are less affected by the concerns.

It is the first time the company has openly recommended restricting running on its tyres, and is the latest in a string of negative headlines.

Having already been forced to change its tyre construction mid-season and have the FIA enforce recommendations surrounding tyre swapping (where teams were running tyres on the opposite side of the car to what they were designed for), the news has not endeared the company to fans or teams.