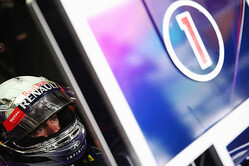 Ahead of today's sole free practice session the air temperature is 27 degrees C, while the track temperature is 34 degrees. It remains sunny albeit with the usual smog.

Once again it appears we could be facing an issue with the tyres. The softs appear to go off very, very quickly, some say after just five laps, with Red Bull clearly not liking them one little bit.

Although there were no serious issues yesterday there was lots of wear, particularly to the left-front, leading to Sergio Perez claiming that we could witness some Silverstone style failures.

While Red Bull dominated both sessions the Austrian team didn't have an easy time of it, other than the tyre issues (softs), Sebastian Vettel suffered an intermittent KERS issue.

Mercedes looks strong here but so too does Lotus, Romain Grosjean in particular, while Williams is reeling from its second successive hefty fine after another wheelnut issue.

Moments before the session is due to start (11.00 local time) officials announce that the start has been delayed by 15 minutes until 11.15 due to "visibility problems". FP3 will now last for just 45 minutes.

"Visibility problems" refers to the 'smog' that will prevent the air ambulance taking off.

Having announced a further 15 minute delay the officials say the session will actually get underway at 11.20. We're getting there.

Waiting patiently at the end of the pitlane is Gutierrez, when the lights finally go green he is followed by Webber, Ricciardo, Vergne and Raikkonen.

The shortened session means there is action from the start, Webber posting a 1:27.879. It also means that teams have been forced to change their strategy, Caterham switching Van der Garde, who described yesterday as his best Friday of the year, to two runs.

In no time at all everyone bar Maldonado has been out, Webber remains quickest (27.180), ahead of Alonso, Perez and Bottas.

Rosberg, Perez and Sutil all have little moments, running wide on various points on the track.

With thirty minutes on the shortened session remaining all but Webber, Massa and Bottas are on track, Perez leapfrogs Webber with a 27.136.

As Alonso goes quickest (27.011), ahead of Hulkenberg, Vettel, on his first flying lap, goes quickest with a 25.332. The German is the first to use the softer rubber indeed, until Webber follows suit and switches to options, he is the only driver on the yellow banded tyres.