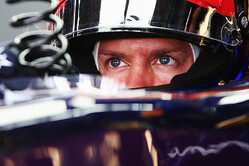 Ahead of today's opening practice session the air temperature is 27 degrees C, while the track temperature is 33 degrees. As in previous years there is a sort of yellow smog hanging over the circuit.

There is only one reserve driver on duty this morning and that is James Calado who replaces Paul di Resta. Contrary to earlier reports the Scot is not sidelined by 'Delhi belly' - though he does have a mild upset - rather Calado has been promised a number of FP1 outings before the end of the season.

The lights go green and Maldonado is first out, followed by Chilton and Bottas.

Within a couple of minutes all but Hamilton, Calado, Sutil and Ricciardo have been out indeed, as mechanics swarm over his car the Australian climbs from his cockpit.

Having eventually ventured out, on returning to the pits Hamilton reveals that he clipped a wall with the left-front wing. But where? This is not Monaco or Singapore.

There follows an inordinately long period of total inactivity - just the sort of thing to encourage those fans watching on TV to make the trip to the circuit - indeed, most drivers are out of their cars. It's claimed that advance ticket sales number just 15,000... and to thing the Indian tax authorities classes F1 as entertainment.

Twenty-five minutes into the session Perez heads down the pitlane again to finally give the fans something to look at. And we (at Pitpass) thought Cricket was boring.

The Mexican posts the first time of the weekend (1:30.953), subsequently improving to 29.324. After just two laps Perez is told to "protect" his front-left tyre. From the pit-wall his progress is watched by Kevin Magnussen.

Thirty-five minutes into the session, having improved to 28.207, Perez heads back to the pits, Maldonado, Bottas and Pic take his place on track. In the paddock, Lewis Hamilton, accompanied by his brother Nick, poses with a couple of fans for pictures.

Finally out of his garage, Ricciardo is on track, the problem with his Toro Rosso, whatever it was, seemingly resolved.

Bottas runs wide at T10, but nonetheless moments later he is one of five new names that join Perez on the timesheet and finally give the fans something to watch. Elsewhere, the TV cameras pick up on Vergne bottoming, his car sending up a shower of sparks.

Bottas goes second (28.893), ahead of Vergne, Button, Ricciardo and Pic as more drivers finally take to the track.

Watched by his girlfriend Jessica and father John - both wearing a lot of pink - Button goes quickest with as 27.995 only to be leapfrogged by Rosberg (27.937) moments later. Elsewhere, Maldonado locks up going into T3 and Massa runs wide in T14.