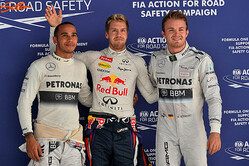 While Red Bull has finished 1-2 in all three practice sessions, the uncertainty in terms of the option tyres means that for once the Austrian outfit really does look to be under threat.

Such is the rate at which the options 'fall off the cliff' the teams are going to have to take some brave gambles with some expected to try to qualify on the mediums this afternoon in order that they can start the race on them.

To add to the drama this morning's session was shortened to 38 minutes due to "visibility problems", the yellow smog that is a feature of the region meaning that the emergency helicopter couldn't take off.

Such is the concern surrounding the softs, Sergio Perez claiming that he fears a repeat of the Silverstone debacle, there is talk of drivers attempting to make one set of primes last for almost 50 laps tomorrow.

One really strange thing this morning, in a very strange session, was the lack of improvements in the final runs, nobody significantly improving their times on what should have been their definitive qualifying set-up.

The tyre situation aside, Lotus is looking very strong this weekend with Mercedes just behind. The Ferraris were quick this morning as was the ever-improving Hulkenberg in the Sauber.

Whilst the majority continue to focus on the title 'battle' - which, let's face it, is a foregone conclusion - we continue to say check out the real fights behind, not only in terms of runner-up spot in the Constructors' Championship but those drivers seeking to retain/find seats for 2014.

Whilst it's the Drivers' Championship that gets the kudos, the headlines, it is the teams' version that decides the prize money. Also, in terms of Mercedes, it might give those who hold the purse strings back in Stuttgart a little more faith.

There is more, much more, than the 2014 titles at stake here.

The lights go green and Gutierrez is first out, the Mexican having a low-key weekend following his success in Japan.

As Gutierrez begins his flying lap, he is joined by Button, Rosberg, Hulkenberg and Sutil. All are on primes.

Gutierrez gets proceedings underway with a 27.529. Shortly after, Rosberg posts 45.785!

As expected, Chilton, Van der Garde, Pic and Bianchi are on the softer rubber.