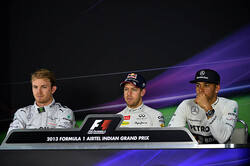 Sebastian, it seems to have just been a seamless weekend for you. It seems to have all gone perfectly so far.
Sebastian Vettel: Yeah - so far it's a brilliant weekend. The car has run basically very, very well since yesterday morning. We didn't have to change a lot and through qualifying it just got better when the track ramped up. New tyres again, new tyres again and yeah, the car was amazing. It's a great circuit, I really like the flow of the track, especially around the middle sector with all the high-speed corners - but for sure it's not a secret if your car behaves the way you want to through there then for sure you're going to enjoy that a lot. So, I think we did that today. Great result - also for the team. Obviously Mark is on a different strategy so we'll see what the race brings tomorrow.

Your third pole position here, you've led every lap so far, you must start favourite to win the race tomorrow - and take the ultimate prize.
SV: Yeah - I'm trying not to think about it. Obviously it's difficult when every second person in the paddock asks you the same question. But I think we've done pretty well in the past, focussing on every single step and I don't see a reason why to change things for tomorrow or the next couple of races. So, yeah, we're in a good position. I think we worked hard to be there and yeah, tomorrow is a long race, as I touched on, with strategy I think it will be tricky to always do the right thing - but there's a lot of laps so I think we have a quick package and should be in good shape tomorrow.

Nico, you said yesterday it was a tough day. Obviously a lot of progress made.
Nico Rosberg: Yeah, and to be honest we're - I'm - completely on a knife's edge. Really pushing the limits this weekend, just trying to extract that little tenth more out of the car. Trying different things, new ways, new setups and until now it works. So I'm very pleased with that. Qualifying in second is better than I hoped for - because of Mark being on another strategy, so for the moment it's looking OK. The race is still going to be tough because it's very different circumstances here with the Option tyre really struggling at the beginning of the race tomorrow and then Prime will be OK but also the balance of the car is all very different. So, we'll see.

The strategy really is what it's down to. Is that preferable for you drivers? Is that something you enjoy?
NR: Well, I'm very interested in it, yeah, but it's so complex that you really rely on the pit wall to do their job - but of course I prepare for it well before the race and look into it and also discuss what my preference is and all of those things.

Lewis, third on the grid and obviously great that the two Mercedes are second and third - best of the rest as it were - behind Sebastian. What are your feelings?
Lewis Hamilton: It's been a tough weekend. It's been a tough weekend for us and incredible… congratulations to Sebastian, it's obvious that that's some serious pace that they have, especially with Webber on the Primes just behind us. But we've been pushing, as Nico said, as hard as we can. We really want to get a great result this weekend. Strategy is going to play a huge part but I was a little bit surprised to be where we are but generally, bit by bit, adjusting the set-up and everything, we got a reasonable balance and hopefully tomorrow we can push together to try and stay ahead of the rest.

Any traffic issues out there?
LH: I did have through eight and nine. I did have someone in front of me - I'm not really sure who it was, I was so focussed on the road. It didn't help (To Vettel: "It might have been you!"). I think it may have been one of the Red Bulls, but I probably didn't lose too much time. Yeah, anyways, look forward to tomorrow.

Sebastian, did you consider the same strategy as Mark?
SV: Well, I have to start on the different tyre so obviously the strategy is different. It's all difficult now, as Nico touched on, obviously. It's very interesting, surely not easy. I think in the end if everybody does his bit then it probably doesn't matter too much. Surely the race will different in the beginning if you start on the opposite tyre. So for us three I think it's the same thing but then obviously I think Mark is the first car on Primes - with a different strategy.

Sebastian: 43rd pole position, as I said, you've got an amazing record around here. What is it about this circuit?
SV: I don't know. I really like this circuit, especially the middle sector. I think it's very challenging with all the fast, or high-speed corners. It really depends, obviously, if the car does what you want. I think that's what all of us enjoy and in particular you get to enjoy that around these couple of corners. So, yeah, the car's been strong since Friday morning, since yesterday morning. We didn't have to adjust that much. Of course you always trim a little bit - in the right direction hopefully. But, yeah, we've been very strong on both compounds, so a good result, and also a good result for the team with Mark sitting in fourth, right behind those two guys.

Interesting with that strategy certainly. I wondered if you'd considered that or how much of a threat that strategy is?
SV: Which one?

With the medium tyre.
SV: Well, difficult to say now. Obviously we decided to go for what I did together, and Mark decided to go for the opposite. So, yeah, what turns out to be the right strategy, we'll find out tomorrow. But I'm sure the race is long and you will have plenty of time to make up. In the end I think the strategies shouldn't determine the result that much. We're got very good pace, the car, as I said, behaves well around here, so we'll see what we can do tomorrow.