Hulkenberg on the verge of joining Sauber? 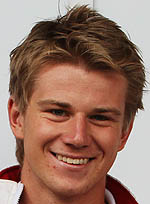 Nico Hulkenberg is poised to join Sauber, according to the latest suggestions emanating from the paddock. The German, who made his debut with Williams in 2010 before sitting out last year, has increasingly impressed with Force India throughout 2012 against similarly rated teammate Paul di Resta.

It's been common knowledge in the paddock that Hulkenberg would likely move on from the team for 2013, many linking him with a move to Ferrari in place of Felipe Massa. However with the Brazilian looking increasingly safe for another year at Maranello it seems 'The Hulk' could instead be on his way to Sauber.

Having lost Sergio Perez to McLaren for next season the Swiss squad is in the market for at least one driver, though many believe it will also choose to replace Kamui Kobayashi. Esteban Gutierrez is widely tipped to take Perez's place with Hulkenberg the likely successor to Kobayashi.

If Hulkenberg were to move it would open a seat at Force India, which Adrian Sutil, Jaime Alguersuari and Sebastien Buemi have all been linked to. Another potential candidate is the team's reserve driver Jules Bianchi, who has enjoyed a number of Friday morning test sessions at Grands Prix this season.

Since being dumped by Toro Rosso at the end of 2011 Jaime Alguersuari has been working as test driver for Pirelli. The highly rated Spaniard has also been adamant that he would return to the Formula One grid for 2013, with some suggesting he signed a deal in the build-up to the Singapore Grand Prix last month.

While Sauber has yet to confirm its plans for 2013, saying only that it will announce its line up in 'due course', Hulkenberg did himself no harm with a strong performance in Korea.

"That race was a lot of fun and it's great to get such a mega result," he said of his eighth place finish. "I had the Lotus pushing me hard for quite a while and then a nice fight with Romain generally and even before we caught Lewis. Then Lewis was more salsa in the soup, so quite entertaining."