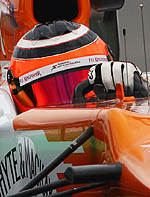 Nico Hulkenberg: "That race was a lot of fun and it's great to get such a mega result. It wasn't easy though, and for most of the race I had the Lotus of Romain [Grosjean] pushing me and some great battles. Even the first pit-stop was very close with Romain, but the team did a great stop because it was important to stay ahead at that stage. I think the best moment of the race was the fight with Lewis [Hamilton] and Romain in the final stint when I got ahead of both of them in turn four. They both went to the inside so I just saw the opportunity to use the outside line and made the move work. That certainly put a big smile on my face. So a very positive day, an amazing job by the whole team and lots of positives to take as we head to India for our home race."

Paul Di Resta: "A tough race in many ways and it's fair to say that the result in qualifying hampered us quite badly. We expected the supersoft to be a better race tyre and so we saved it for the second stint. As it happened, the soft tyres did not last long enough at the start of the race and when I switched to the supersofts they started graining straight away. So we were not on the ideal strategy and that impacted the whole race, and after that I was always struggling with traffic and couldn't make any progress. On the positive side the car seemed competitive here with the points for Nico, but it's just a bit frustrating that we couldn't maximise it."

Robert Fernley, Deputy Team Principal: "Another very strong day for us with Nico battling hard and showing the race pace we knew was possible. The race-long battle with Grosjean meant Nico was always under pressure, but he kept his nerve and came out on top. I think Nico's move on Hamilton and Grosjean was outstanding and definitely the highlight of the race. With Paul we took a strategic decision to cover both Williams and Sauber potentially trying a one-stop race, but it soon became clear that two-stopping was the way to go. As a result Paul's strategy was compromised and it was difficult for him to move up into the points. However, he battled hard with Perez in the closing stages to prevent Sauber picking up the final point. We leave Korea with eight important points; we're closer to Sauber (27 points behind) and have good momentum heading into our home race in two weeks' time."