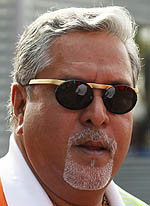 One of Force India boss Vijay Mallya's core businesses, the airline Kingfisher, has run into serious problems with all flights cancelled at short notice.

The airline, which is heavily in debt, and with some employees salaries months in arrears, ground to a halt after a strike by engineers compromised safety. Announcing that all flights were cancelled for the next three days, the airline blamed the move on; "employees who had "regrettably chosen to take law into their own hands forcing a complete paralysis of operations".

"This was necessitated because of the intolerable violent behaviour by a section of the staff against all those who want to work," Mallya told Mail Today.

On Monday, India's Civil Aviation Minister, Ajit Singh, had warned: "I will not hesitate to shut down Kingfisher Airlines if there is any question of it being a safety hazard."

Following today's move by the airline he added: "The Directorate General of Civil Aviation (DGCA) has called the Kingfisher management as the matter is now grave. DGCA will seek an update from the airline on whether it is genuinely feasible to continue.

"There can be no compromise on safety of air passengers; their safety is paramount," he added. "We had asked DGCA for an airworthiness audit, at that time things were okay. This was one week back.

"But, now the engineers have struck work, the airworthiness cannot be certified and it is a matter of concern. It is a free market and passengers have to decide themselves, but my concern emanates from the engineers' strike, for this puts the airline in peril. Issues between pilots and management are internal issues and I don't want to comment on that. I am talking from a safety standpoint."

Meanwhile Aviation sector expert Jitendra Bhargava believes this is the end for Mallya's airline. The airline should have been closed by now. Mr Mallya comes from a liquor business industry which has a huge margin of 35 per cent, but airlines have a thinner margin of around 2 per cent. He followed a wrong business model. The airline earlier said it will focus on the upscale market. They could not understand the economics of the sector and never took necessary corrective action."