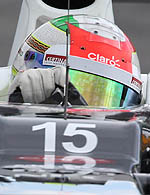 The Sauber F1 Team had an eventful but fruitless Korean Grand Prix. Kamui Kobayashi couldn't avoid an accident after the start when braking for turn three. After 17 laps he had to park his car in the garage. Sergio Perez was unlucky at his first pit stop, during which he was delayed by a technical problem. He dropped back from sixth to 13th. After a strong push towards the end of the race the Mexican finished in 11th - just 0.37 seconds away from a point.

Sergio Perez: "It is a big shame that we didn't score points today. My first stint was really good, despite a little understeer which came from the incident after the start when I damaged the front of the car. But our plan was good and the strategy seemed to work out. Then unfortunately we had a problem at the pit stop and could not recover from it. This was when we lost the race because I dropped behind a group of cars. Nevertheless towards the end it again looked like there was a chance of scoring a point. My car was quick, I overtook Paul (di Resta) and Lewis (Hamilton) had a problem. But in the end I just didn't manage to catch him. Today, I think sixth would have been what we could have done in perfect circumstance."

Kamui Kobayashi: "This is a race to forget. Initially I had a good start but then we were four cars side by side approaching turn three. I had Nico (Rosberg) to the right and Jenson (Button) and Sergio on my left hand side. Someone hit my rear tyre and then it was impossible to control the car, but I had to brake at some point. I didn't manage to avoid the accident, and I feel very sorry for ruining someone else's race, and certainly this was not my intention. It was just a very difficult moment and I had nowhere to go but I think it was my mistake. I pitted for repairs but my car had too much damage to finish the race so we had to give up after 17 laps."

Monisha Kaltenborn, Team Principal: "This was a disappointing race for us, after we had been able to improve constantly during the weekend. Kamui's race was ruined after just a few corners, and Sergio was unlucky at his first pit stop when he lost time due to a malfunction of the pit system. It's a real shame because he drove a great race and finally only missed the last point by a few tenths of a second."

Giampaolo Dall'Ara, Head of Track Engineering: "After the start both our cars were damaged. Sergio made contact with a car and damaged the nose cone. Kamui's car was damaged at the front and the rear where the punctured tyre destroyed the floor. We were not sure if the car was still safe to drive, therefore we decided to bring him in. Sergio was well under way in his first stint. He was able to open the gap to Michael (Schumacher). Then we timed his call so that he would have been out in front of a group of four cars. But then we had a problem with the pit system with the green light not going on, which is something we have to look into. Because of this he lost four seconds, was therefore behind this group, and was stuck there because he couldn't overtake. Without this I think eighth would have been easily possible."