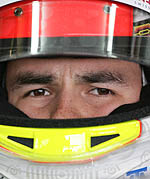 After having qualified so well just one week ago in Japan, neither of the Sauber F1 Team drivers made it into the top ten qualifying for the Korean Grand Prix. Both of them struggled when the yellow flags came out in the last sector on their final and crucial lap. Sergio Perez qualified 12th for tomorrow's race in Yeongam, and Kamui Kobayashi came 13th. However, at least this way a set of fresh super soft tyres was saved for the race.

Sergio Perez: "It is a shame, as we were so close to getting into Q3 but, of course, I had to back off because of the yellow flags in the last sector. Well, the positive side is that we have saved a set of fresh tyres for the race. In any case it will be an interesting one because I could not do long runs in free practice to the extent I wanted to."

Kamui Kobayashi: "I would have been easily five tenths faster but I had to back off when the yellow flags came out. I am quite disappointed, especially as we had improved the car for Q2. In Q1 initially I had problems with oversteer, but our set up changes worked out nicely. However, here we have a track which allows overtaking and the race is always a different story."

Monisha Kaltenborn, Team Principal: "We showed a strong performance today, which was not rewarded because both our drivers had to slow down due to the yellow flags in the last corner. They both delivered a strong qualifying and, based on the long runs we did yesterday, I'm confident we can have a strong race tomorrow."

Giampaolo Dall'Ara, Head of Track Engineering: "There's no doubt we were unfortunate today with the yellow flags, but we have to take the positive from the day. After having some troubles yesterday, we managed to improve the set-up significantly over night and both our drivers were very strong. However, I believe the performance of the car is stronger than the results suggest, so we have every reason to be positive for the race."