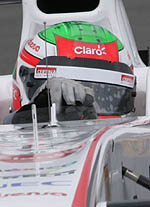 The Sauber F1 Team added four more world championship points to its tally in an emotional Japanese Grand Prix when Sergio Perez finished eighth after starting from 17th on the grid. He also set the second fastest race lap. Kamui Kobayashi, who started seventh, which was the best grid position for the team since Peter Sauber bought it back almost two years ago, came 13th at his home race. He was not able to recover from a problem at the start, and his tyre strategy was compromised by the unlucky timing of a safety car period. However, race day in Suzuka was dominated by it being the decider of the 2011 drivers' championship, and the entire Sauber F1 Team wants to congratulate Sebastian Vettel for his well deserved second consecutive title.

Sergio Perez: "I am very happy for the team to have scored some points here in Japan, especially after we had that technical problem yesterday in qualifying and I had to start 17th. But today the strategy with the tyres worked out very well for me, and the team did a very good job on this. Also the car's performance was good. I pushed very hard, and gave my maximum today. Physically it was very hard for me because I am suffering from flu, so I'm totally happy that I brought the car home in a position good enough to score points."

Kamui Kobayashi: "It was a tricky race for me. At the start when I released the clutch the car suddenly was in anti-stall mode, and that was why I lost five positions straight away. I tried to fight other cars then but overtaking wasn't as easy as it was here last year. Then the safety car came out in what was a bad moment for our strategy. I did my second stop when the safety car was out, we changed from the soft to the medium compound and with those tyres I then had to go to the end of the race - 29 laps. In the end they were just so bad that I couldn't defend my position anymore. Anyway, I had a good qualifying here and the car's performance in the race has definitely improved, so we will keep pushing at the remaining races. I am very proud of all the Japanese fans who are so excited about Formula One. They are a great crowd and for me it was a very emotional day."

Peter Sauber, Team Principal: "Everybody in the team hoped Kamui could score a good result in his home Grand Prix. He would have deserved that after his strong qualifying performance, but then things went wrong at the start. He lost a lot of positions, and his aggressive strategy didn't work as a result of that. Sergio drove a brilliant race. Starting from 17th and finishing eighth says it all. He was aggressive and consistent at the same time. His result also proves that we made a clear step forward with our car, which is important for the upcoming races. Congratulations to Sebastian for a well-deserved world championship title after an outstanding season"

James Key, Technical Director: "It was a tough race, very close and competitive. It was great to bring some points back, as we needed them. The whole team worked very hard and deserved them. It was a great shame for Kamui, who got an anti-stall at the start and lost several places. We had him on an aggressive strategy with the soft tyres to begin with, but he ended up in traffic, and also the safety car came out at the wrong time for him. He did a great job to hang on to his tyres at the end, but the start compromised him. We have to look at why he had that problem. Sergio drove a really strong race, and his pace was very good. His strategy was the opposite to Kamui's, and it seems that this was the right way to go. He wasn't helped by the safety car either, but his pace first on the medium tyre and then the soft tyres towards the end was very consistent, and it allowed him to make up many positions from P17 to P8. He really did a fantastic job. We can be pleased after a long, hard weekend coming home with four points."