Kobayashi to start from seventh 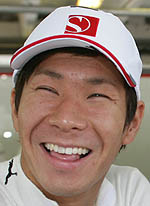 Local hero Kamui Kobayashi will start the Japanese Grand Prix from seventh after the FIA corrected the original starting grid.

According to the official timing service, the Sauber star - who didn't post a time during Q3 - was to start tenth behind Michael Schumacher and the Lotus Renault Grand Prix duo, Bruno Senna and Vitaly Petrov.

In their post-qualifying press releases Sauber and Mercedes both admitted that the grid order could change, the FIA finally correcting the mistake a couple of hours after the session ended.

Consequently, Kobayashi will start seventh, behind Alonso and alongside Schumacher.