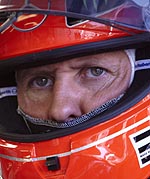 Michael Schumacher has been handed a reprimand by the stewards after his dramatic exit from the Singapore Grand Prix. Attempting to pass Sauber's Sergio Perez, the pair made contact catapulting Schumacher in to the air and retirement.

"What happened was what I would call a misunderstanding," the German explained. "He was about to go inside and lifted, and I was not expecting him to do that so early, and therefore hit him. It's probably one of those race incidents which look more impressive from outside than from inside, as I am totally ok and my impact in the end was not too heavy."

"I think Michael was too optimistic with what he tried," countered Perez. The Mexican eventually went on to finish tenth, after stopping to replace a puncture and losing a spot to Felipe Massa.

It was an eventful race for Perez who was also involved in an incident with Bruno Senna when the Renault driver was wrongly informed he was racing the Sauber. It led to a clash the stewards deemed was an avoidable collision, fining the Renault team €7,500.