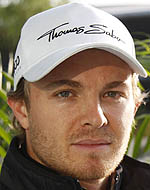 Nico Rosberg finished the Singapore Grand Prix in seventh place this evening whilst team-mate Michael Schumacher retired from the race following a collision.

Nico ran a three-stop option/option/option/prime strategy stopping on laps 9, 22 and 29. After starting on options, Michael stopped on laps 10 and 24, both times for options, prior to his retirement. Michael was running in ninth place when he collided with the rear of Sergio Perez's Sauber at turn eight on lap 28.

Nico Rosberg: "The optimum today would have been sixth place but it didn't quite work out for us this weekend. I was struggling with the rear end in the race, and our car just really didn't suit this demanding track. I had more problems with tyre degradation than the cars around me, which combined with having to switch our strategy when the safety car came out, meant it was impossible to make any progress. Whilst we might not be happy with the outcome of our weekend here in Singapore, we will now work hard to improve the car for the next races here in Asia."

Michael Schumacher: "It was a very unfortunate ending to my race in Singapore tonight and obviously I am a bit disappointed. What happened was what I would call a misunderstanding between Sergio Perez and myself. He was about to go inside and lifted, and I was not expecting him to do that so early, and therefore hit him. It's probably one of those race incidents which look more impressive from outside than from inside, as I am totally ok and my impact in the end was not too heavy. It was a pity because my car and the tyres worked well, and therefore the pace was very good. I will look ahead to the next races and hope to have better endings there."

Ross Brawn: "It turned out to be a fairly tough race for us this evening. As expected, we didn't have the pace to match the leaders but we were quite comfortable in the gap behind the top six cars. Unfortunately Michael's accident hurt us both from his own point of view and that it brought out the safety car at the wrong time for our strategy. Nico then did a very good job to make the set of tyres that he had last for over half of the race. Seventh place was about as much as we could have expected today, and whilst it feels disappointing, we will keep working hard and pushing forward."

Norbert Haug: "The race developed quite well for us until Michael's incident with Sergio Perez which brought out the safety car. We had no choice but to pit Nico and put him on the prime tyres, on which he then did 31 laps, more than half the race distance. Nico did a very good job to keep the tyres together for such a long stint. Michael's speed before the accident looked good, considering our current technical package, so it is a shame for him as he could perhaps have finished in front of Nico. Without the safety car, and with an ideal strategy for Nico, he could have been in a position to finish one place higher. Thank you to the organisers here in Singapore for hosting this race, which is one of the most spectacular events in the calendar, and produces the best television images over the course of the season."