Daly claims Schumacher should have been penalised 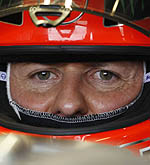 Former F1 and Champ Car racer, Derek Daly, who was one of the official race stewards at Monza, claims that Michael Schumacher should have been penalised.

As the German battled with Lewis Hamilton, there was widespread speculation that the seven-time champ was breaking the rules in his desperation to keep the McLaren driver at bay.

While Hamilton was giving little away after the race, others were not so reticent, teammate Jenson button and team boss Martin Whitmarsh both describing the German's tactics as "harsh".

However, now Daly has spoken out, the Irishman, admitting in a statement that at the very least Schumacher should have been handed a drive-through penalty.

"On lap 20, race director Charlie Whiting asked the stewards to look at an incident between Felipe Massa and Jarno Trulli at the second chicane," Daly revealed. "While looking at the slow-motion video of this incident, I missed the Schumacher/Hamilton incident that happened at that very moment.

"When I looked at it again at home, I believe that Schumacher should have been given a drive-though penalty," he continued. "He was warned repeatedly and this style of driving is not what you want the future generation of drivers to perfect. We as stewards probably let Charlie down with this one."

Article 20.2 of the 2011 FIA Sporting Regulations states that; "manoeuvres liable to hinder other drivers, such as more than one change of direction to defend a position, deliberate crowding of a car beyond the edge of the track or any other abnormal change of direction, are not permitted".

However, in this particular case, the argument is somewhat muddied by the confusion as to what exactly constitutes a move; for example, if a driver is moving back on to the racing line after an earlier blocking move does this constitute two moves, a situation not helped by the fact that the run between the second chicane and the first Lesmo is so short.