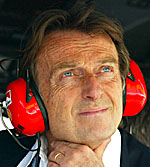 Ferrari president Luca di Montezemolo has repeated his call for teams to be allowed to field three cars as well as criticising the sport's reliance on aerodynamics.

For some time the Italian manufacturer has advocated the move, di Montezemolo recalling the 1961 French Grand Prix, when Giancarlo Baghetti won in a Ferrari entered by the Federazione Italiana Scuderie Automobilistiche (FISA), a coalition of independent Italian team owners who had agreed a loan deal with Ferrari.

"I still believe it is a good idea, as it was in the past and would be today, if the big teams could give a car to the smaller teams," he told reporters.

"The gap between the best five or six teams is very big," he continued. "To race today for a small team is very expensive, they have to design and develop a new car. And thirdly I am looking for new drivers in F1.

"I'd like to see a McLaren, a Red Bull, a Williams for the small teams. It means that the small team will be more competitive, then you will spend less money and finally we can give room to new drivers in the future."

However, the introduction of a third car isn't the only bug bear the Ferrari president perceives. "The current Formula 1 is still too dependent on aerodynamics and cutting out testing during the season has put too much emphasis on simulation work," he said.

"At the mid-point of the last decade, there was definitely too much testing," he admitted, "but now we have gone in the completely opposite direction."

Asked about speculation that he might move into national politics, the Italian smiled and said he is more committed to Ferrari than ever.