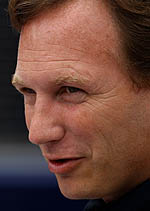 Red Bull boss Christian Horner has hit out at fresh claims that his team broke the Resource Restriction Agreement in 2010 in its quest to secure the titles.

The Resource Restriction Agreement (RRA), is the agreement between the teams, reached in 2009 at the time (then FIA President) Max Mosley was threatening to impose budget caps, which effectively limits budgets, staffing and resources.

Earlier this year there it was announced that FOTA was to investigate a number of teams including Red Bull following claims that they had breeched the agreement by going over budget, a claim strenuously denied by Horner at the time.

The story died down, but then, almost miraculously, as the teams were en route to Singapore, where Red Bull could wrap up at least one more title, new claims of a budget discrepancy began to appear in the Italian media.

Autosprint suggested that the Dutch consultancy firm CapGemini, during its audit of a number of teams, had discovered "budget discrepancies" at Red Bull.

Speaking to Pitpass in Singapore, Horner was only too happy to rubbish the new allegations. "The thing is completely fictitious," he told Mat Coch. "There was an audit that was done, that was commissioned by FOTA with the agreement of all of the teams, carried out by the Dutch firm CapGemini, and I think four or five participated in that - which Red Bull did.

"We fulfilled the scope of the audit that was agreed by all the financial directors in the FWG," he continued. "And CapGemini confirmed that to FOTA to say that all teams were found to be in conformity with the regs.

"However," he added, "when further information was requested outside of the scope we didn't feel it was appropriate to offer that information. As far as dealing with the scope, the benchmarking process that was done, we completely complied with what was requested from FOTA."

Horner then referred to an email on his Blackberry from CapGemini. "They sent this note," he said, it reads: 'Confirm that all the teams successfully implemented the processes, procedures and the sporting systems for the RRA and have observed the rules and regulations in their daily practice'.

"Within our own specific one," he continued, "they have concluded that they; 'have sufficient basis and inputs to answer the questions asked by FOTA'.

"So that is what went to (FOTA chairman) Martin (Whitmarsh)," he added. "Anything beyond that is completely fictitious but it's almost come to be expected if it's not front wings or ride height controls... It's one of those things. But nobody's protested. We've been found to be in conformity. I can't really say more than that."

Meanwhile, Pitpass was first alerted to the Autosprint report on Wednesday, when a trusted Red Bull source told us: "We are intrigued as the audit we had was fine and the figure quoted is almost a much as our entire car budget, so something is a bit fishy.

"Got to wonder too," added the source. "There is a lot of resentment of Red Bull and as usual it's the petty old scores and one-upmanship of the F1 seniors coming into play."

In a follow up, the source suggested that CapGemini would be none too pleased to have its integrity questioned.

The other teams given the once over are believed to be McLaren, Ferrari, Mercedes and Sauber.