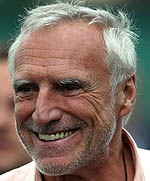 For the past few years the ownership of Toro Rosso has been a hot topic in Formula One. In contrast to its bigger brother Red Bull Racing, Toro Rosso's performance is consistently underwhelming. It currently lies eighth in the standings and its only race victory was a distant three years ago. This is hardly the best backdrop for Toro Rosso's owner Red Bull to maximise its return by selling the team That didn't stop one blogger speculating not just that the team would be sold but that it has already been sold. Only nine days ago the blogger wrote "the word is that [Mercedes GP part-owner] Aabar has acquired a minority shareholding in the team (around 40 percent) and has an option to increase that to gain control (probably around 60 percent)." Not according to Red Bull boss Dietrich Mateschitz.

Writing today in the German Financial Times, Pitpass' business editor Christian Sylt quotes Mateschitz saying that "Toro Rosso isn't up for sale but we would not rule out partnerships provided that the partner is the right one." This puts paid to the rumours about the team being taken over by Abu Dhabi's International Petroleum Investment Company (IPIC), which owns the majority of Aabar as well as Toro Rosso sponsor Falcon private bank. Spanish media reports claimed that IPIC would take over Toro Rosso and rename it Team UAE but this is clearly nothing but a pipe dream.

Although Mateschitz says he would also not consider selling a stake in Red Bull Racing he adds that it is difficult to forecast and "a decision always depends on the bigger picture, politics, the influence of F1's shareholders and lots of other factors."

These aren't the only rumours Mateschitz quashes. Since joining NASCAR in 2007 Red Bull has not had anywhere near as much success in it as it has had in F1. In June it was reported that Red Bull will put the brakes on its involvement with NASCAR at the end of this year but this seems to be premature. Mateschitz says "this is not yet a final decision but we had many reasons to re-analyse our involvement with the goal of either to confirm our participation in NASCAR or to question it."

He adds that the key factors which will affect Red Bull's decision are target groups, marketing, media values, the engine, the fact that NASCAR is a purely American series and of course success and the cost to benefit ratio.

Back in July our aforementioned blogger wrote "the news that Red Bull is going to pull out of NASCAR and leave its team to find other partners has led to the suggestion that the Austrian drinks company will probably be spending its US motorsport budget on something else - and the suggestion is that this will be as the title sponsor of the United States Grand Prix at the Circuit of the Americas in Austin." Once again, Mateschitz begs to differ. "As a point of principle we aren't in F1 as sponsors but we are represented with our two teams," he says. Given the success they have brought Red Bull you could hardly argue with that.