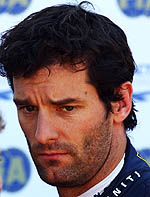 It was all going so well... Mark Webber had given his frank and honest opinion on pretty much everything, and then came the dumbest question ever.

The Australian, who is battling for runner-up position in the championship, whilst watching his teammate become the youngest double world champion in the sport's history, had answered questions on all manner of subjects, including tyres, starts and 2012, he had even praised his teammate's domination of the current season. But then some bright spark asked the no-nonsense Australian if he felt frustrated that Vettel had won (the title) and he hadn't.

A few minutes later, when the journalist interrupted the Red Bull driver as he answered another journo's question, Webber hit out again, calling the hack a "f*****g pig", though maybe that should have been 'cochon'.

When he wasn't allowing himself to be wound up by someone who really should have known better, Webber was remarkably forthright. Asked about his teammate's domination of the season, he said: "I think there's a few drivers who would have loved for it to have gone longer, but he has the chance this weekend. I don't think it's important when it happens, because it's probably going to happen, it's just a question of which race - here, Japan, Brazil, whatever.

"He's had a great year," he continued, "lots of victories and everybody else scrapping round for podiums, but that's it's gone. It's a completely different championship to last year where the racing and the championship was very very exciting. This year the racing is even better but the championship is very boring."

"He had a great run at the start of the year," Webber admitted of his German teammate. "I wasn't really on top of everything at the start. Obviously I had quite a few reliability issues as well which is never ideal, but in the end I think my form has been a lot better in the last few races, for sure. Unfortunately when I got in the lead at the Nurburgring and a few races like that we didn't have the car to win anyway because it was difficult there. Spa was probably the most frustrating race of the year in terms of being the quickest guy in the race but having to deal with a tough start to the race and then missing the safety car, and the free pitstop with the safety car. That happens, a missed opportunity but I think it was going to be very, very difficult for me this year to put a championship together this against Seb given the start that he had."

Asked what was left to watch, Webber said: "I think enjoy the racing. I think that the biggest highlight of the year this year has been the racing. I think if you look at the highlights package you wouldn't probably think that someone could have run away with the championship like they have, and Seb has. But the racing has been enjoyable for all of us; the fans at home, the media, us, it's been pretty good. That's what they can enjoy. Obviously the numbers are becoming unimportant."

One of the biggest changes for this year has been the return of Pirelli. "That's been a huge change," said the Australian. "In Valencia it was a bit of a change for me, I could do the same strategy for the first time, in terms of all the races before that I had the pace but I always had to make an extra pit-stop, and I don't really understand why that happened. But in the Valencia was a turning point in terms of things changing. That was helping my Sunday out. My Sunday performance before then I needed to do this extra stop which is always littered with problems; littered with clearing traffic, littered with coming through. Yes, I think it will be much more stable next year in terms of continuity of the tyres and we certainly need to put up a better fight than we did this year, which is clearly possible. No question about it, it's just the way the cookie has crumbled in a lot of cases this year."

Asked to compare the Pirellis with their Japanese predecessors, he said: "It's different. I think we saw a classic case I think with Heidfeld and Robert a few years ago from the Michelin to Bridgestone change. But that's how it is. That's our job. It's up to me to get on top of it. And I have done. I have done to a large degree since Valencia, it was a little bit of a turning point really. Since then Sundays have been much better for me."

Looking ahead to next season, he said: "You need to have a better start mate, for sure in the championship. You need to have a similar year to what I did last year. Out-qualifying Seb more often, which was certainly the case last year, and getting track position and getting the stops. That's where it's important to get that, and you don't get that if you always finish one position behind. Even if you're on the road first and second, or second and third as we saw in Silverstone, you never really get the momentum.