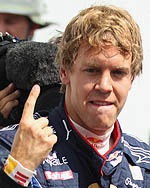 Sebastian Vettel: It was difficult in Q1 and Q2, although at the end of Q3 the circuit was drying very quickly. I didn't feel comfortable at the beginning of qualifying, but for Q2 I think we made a big step forward and I rediscovered Spa in a way! In the last session, I used the first two laps of Q3 to get temperature into the tyres and then for the last two I tried to push as hard as I could. I think tomorrow it will be one of those races where anything can happen. I think the best way to get a forecast here is to look up into the sky and see what's happening. It's likely to be dry tomorrow and the balance felt good at the end of Q3 when it was dry. It's a long race tomorrow, but I'm looking forward to it.

Mark Webber: It was a close session today; I think I went a bit too hard on the slicks initially in Q3. I felt comfortable, and you never know if the lap you're on is the one before the weather changes. There were sprinklings of rain here and there and as soon as we finished Q3 it began to rain again, so I probably could have built up a bit slower and had a better run into the third and fourth lap. But, that's how it goes and we have had a smooth weekend. It's very easy in these conditions to end up out of position and we're in position, it would have been nicer to have been a slightly higher up, but the guys in front did a good job and we're in the hunt tomorrow.

Christian Horner: A great team result to get pole and third, after a really exciting and difficult qualifying in very changeable Belgian conditions. It was almost like playing roulette with the weather at different stages and it was crucial to be on the track at the right time on the right tyre. We made the right calls as a team today and the drivers built through each session, getting onto slicks in the last session when ultimately it came down to the last lap. It was a phenomenal lap from Sebastian for pole and Mark was right there as well, having been very quick throughout the weekend so far. It's great to be starting in first and third for tomorrow's race, hopefully the conditions will be a bit better than they were today.

Cyril Dumont, Renault: It was a tricky session today, as we had had a lot of rain for the three practice sessions, so it was difficult to know where we were in terms of pace. I think we did a really wonderful job to be back at the top of qualifying after the summer break. We had the pace today to have both cars on the front row, but unfortunately Mark had some traffic in Q3, which was a shame.