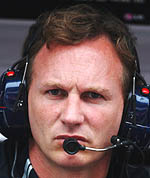 A gamble on tyres cost Mark Webber any chance of victory in the Hungarian Grand Prix, Red Bull believes. Changeable weather throughout the race promoted a mixture of strategies, Webber opting to stop for intermediate tyres as the rain began to fall just after half distance.

It was a decision which ultimately cost the Australian the chance of a podium, having to switch back to slick tyres from the intermediates almost immediately as the weather changed once more. "That's the roll of the dice you've got to make," he conceded after the race. "If it rains heavier for another three or four minutes, then it's the right decision."

As it was Webber dropped back to sixth after stopping on consecutive laps before ultimately recovering to fifth at the flag. "It was my call. I decided to roll the dice and if it worked obviously you win big, if you lose you lose a position. In the end that's the way it was."

Unlike Webber, teammate Vettel didn't stop when the rain fell, a decision which came from the pit wall rather than the cockpit. "For probably two or three laps the slick was the wrong tyre to be on," said Christian Horner. "About 50% of the grid came in for an intermediate, and arguably for those two laps it was the right thing to do. But then the rain stopped and therefore an additional stop for Mark probably cost a podium today."

Instead Red Bull gambled on leaving Vettel on slicks in the worsening conditions as Webber had a set of intermediates fitted. "We thought 'okay at this point we may as well cover both off', so we split them. We left him (Vettel), and he managed those conditions very well, because it's very easy to make a mistake. It came right for him.

"He'd have possibly been happier to hear 'box for inters' at that stage, but obviously the rain stopped within two minutes, and then the heat started coming back into the slicks," Horner continued. "It's the type of call that could go either way for you. That call could have arguably won Mark the race if it continued to rain, but it didn't."

With Vettel finishing second, the German has extended his championship lead over his teammate to 85 points, with just 200 points up for grabs in the remaining eight races. The race adds thirty points to the teams' constructors' championship tally, the outfit enjoying a 103 point advantage at the head of the class with 344 points left on offer.