What's going on with Vettel? 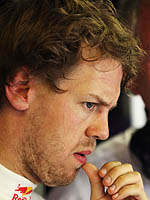 If you believe reports in the German press, championship leader Sebastian Vettel has lost his nerve. After a disappointing weekend in Germany, where he only managed fourth, he was looking for a much different weekend in Hungary. However that's not been the case, the German seemingly still unhappy with the car leaving his team to pull an all-nighter on Friday night. It sent some sections of the media room in to a frenzy as they speculated that his season is about to come crashing down around him.

Yet for all the pressure the youngest ever world champion seems remarkably calm. In interviews he does not seem a man under pressure, his demeanour happy, jovial and relaxed. Nurburgring was a blip on the radar, and to be expected in a long season he reasons. He has a strong grasp on the championship lead and it will take a lot more than a fourth place finish to rattle that unduly.

"We have so many races every year and you will have some races where things might not come together as they should," he said. "Sometimes you struggle with balance or some other problems you have to face, but still you have to go through these times." His logic is sound. In Formula One a driver and team will experience peaks and troughs, the start to the season was undeniably a peak, and if fourth place is a trough he has little to complain about.

It's difficult to understand then what all the fuss is about. Over the last two Grands Prix, since Valencia in fact, the Red Bull has not enjoyed the domination it had at the start of the season. That is to be expected though, as the Milton Keynes team is traditionally quick out of the box but unable to match its rivals in terms of development pace. Last year was a case in point as Ferrari closed the gap in the latter half of the championship to take the title fight to the final race. At mid-season it looked as though Vettel and Webber would run away with it.

Ferrari had a slow start to 2011, the Maranello outfit's wind tunnel having been calibrated incorrectly and resulting in parts which weren't giving the benefits the team had expected. As a result the performance of the team remained stagnant for a handful of races while the problem was sorted, artificially emphasising the distance to Red Bull. With the wind tunnel now fixed the Italian marque is enjoying a renaissance with Fernando Alonso making the most of the new found speed.

McLaren is a different kettle of fish. Its car seems happiest in cooler conditions, which explains why Jenson Button was able to challenge so ferociously in Canada and Lewis Hamilton was victorious in China and Germany. Both drivers are handy in wet and changeable conditions at the best of times, but when the cooler conditions give their cars a little something extra it's all the enticement the duo needs.

There's no reason then to panic, which makes news that Red Bull worked until 5am this morning a little surprising. Teams are allowed to burn the midnight oil four times a year, and generally reserve those opportunities to fix crash damage. A spin during yesterday's practice sessions from Vettel along with running over a chicane are hardly causes for concern, especially when compared to the damage Mark Webber inflicted on his RB7 when he tagged the wall.

The common consensus is that Vettel is unhappy with his car, and in an effort to 'stop the rot' the team rebuilt his steed overnight. A change of chassis last year resulted in improved performances, so just perhaps the problem is not with the car, but Vettel's confidence. A rebuilt car can do wonders for a driver's ego, and when the margins are so tight at the top that's often the deciding factor.

Suggestions his championship charge is on the ropes however, are somewhat alarmist. Ahead of the summer break it's certain both Red Bull and Vettel will want to repeat their early season form and send a message to their rivals. Another relatively poor showing would encourage four weeks of self-doubt where a win would see the German enter the break with his tail up, full of confidence.