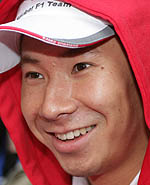 A home Grand Prix is always a very special and emotional race for any driver, and many have claimed just seeing their fans can give them extra impetus. However, for Kamui Kobayashi his return to Suzuka, where the team scored its best result of 2010, will be very poignant after the devastation caused to Japan this year. The country's sole Formula One driver shares his thoughts about the situation his beloved country has found itself in, his initiatives to help the victims and their families, his season so far and the next race.

Kamui, what is your personal impression about the current situation in Japan?
"After the news we received in March about the disaster became worse and worse, I think the way the country has recovered so far is impressive. This is because Japan received a lot of help from outside and also because the Japanese are very strong people and have given each other an awful lot of help and support. Of course, there is still a long way to go, but the progress has been remarkable."

Do you think it is good for the country or the people that F1 is going to Suzuka?
"Yes this is definitely the case. The Grand Prix is a very big event in Japan, it is something very positive for the people and for the country, and also because of the international awareness the race brings. It makes people happy, and they do enjoy Formula One a lot. So we are going racing there, as we have done in previous years, despite the tragedy that has hit the country."

Can you describe your feelings when you heard the news about the earthquake and the tsunami on 11th March?
"I was testing our new car in Barcelona on that day. It was actually the final day of pre-season testing, and it was my turn to do the last day. In the morning initially it didn't sound too bad, but then the news got worse by the hour. It was very difficult to believe all we were hearing was happening, and also difficult to concentrate on testing and the race simulation we were doing. It also made me think about the nuclear catastrophe in Chernobyl, and this happening in a small country such as Japan made me wonder if I would ever be able to go home again, and that was not nice. It wasn't easy. It was very emotional."

How often have you been to Japan since?
"Quite often. I also went straight to Tokyo after that Barcelona test."

Can you tell us about your initiatives to help?
"Well, most importantly there were many initiatives done internationally, and by various organisations. Personally I wanted to do something that would give people an opportunity to contribute small amounts of money. That is why we did the App "You are connected" with pictures and messages from all F1 drivers and team principals for iPhones and iPads. It costs only 0,79 Euro and in the first two months there were more than 10.000 downloads from people in 49 countries. The cost was small, but I think it is important that it was an opportunity for people who wanted to help. Also it was an achievement that all the F1 drivers and teams were doing this in a show of solidarity with the Japanese people. The price was low as, for example, if we asked for ten euros many people would not want to pay this much, but more people can afford to pay this one euro. However, in the end I believe it is the government that has to help the country. For the weekend of the Japanese Grand Prix I have invited a group of 60 people. This is a girls' choir, called MJC Ensemble, from one of the disaster-affected regions, together with their parents or other family members. They come from Minami-Soma city in the Fukushima Prefecture and they will sing the National Anthem before the race. I have organised the bus trip, hotel rooms and tickets for them, so I just hope they have a nice time. I have also had a role as an international ambassador for the Japan Tourism Agency for more than a year. In this role I have attended many meetings in Tokyo and try to support other projects as well. The fact that we don't have a Japanese car manufacturer in F1 anymore makes it quite difficult for me. It would have helped if there was still one and the focus wasn't so much on me."

Last year you made a very special deal with the organisers - can you explain that?
"Yes, this was decided before the disaster struck. I agreed with the organisers that for every championship point I scored in 2011 before the Japanese Grand Prix I would invite one family to the 2011 Suzuka race. We received more than 6,000 letters from people who wanted to come. Every time I scored points I would randomly pick out that number of letters, so now I have chosen 27 families this way. However, because we had such a big response I have picked out an extra ten, and this means I shall have 37 families as my guests."

How would you sum up your 2011 season so far?
"We are certainly more competitive than last year. We had an amazing start to the season in Melbourne, and also since then have had some other good races in which we have been quite competitive. My highlights were Monaco and Montreal. But we have also had our struggles. In Melbourne we lost ten points when we were disqualified, then I had punctures in Turkey and Barcelona, and then gearbox problems in Silverstone and most recently in Monza. You can add to that the fact not all our technical developments during the season brought the progress we expected. So far it has been a mixed season with ups and downs, but it isn't over yet."

Last year in Suzuka qualifying and the race had to be held within a few hours of each other on Sunday because of torrential rain on Saturday. What are your memories of this?
"For us it was a challenging situation with qualifying and the race on the same day. However, for the fans I think it was nice to have so much going on, and they really deserved it because Saturday was terrible for them. They were sitting for six or seven hours in the pouring rain in the grandstands, and they just kept waiting so patiently. I was very pleased when the sun came out on Sunday, and we not only had a good result, but also put on a great show. Actually I think for the drivers the Suzuka circuit is usually more exciting than for the spectators, as it is quite technical, but last year on Sunday they had a lot of excitement. Despite this, I hope it won't rain again this year."

Can you enjoy your home race?
"I am proud to go home and race there, this is certain. It is both - a lot more pleasurable and extra pressure. I also believe many other drivers would be sad if Suzuka disappeared from the calendar. The circuit is very popular and many of the drivers also like to go to Tokyo, I know this as they ask me what to do and where to go."

Finally, what is your aim for this year's Japanese Grand Prix?
"Last year's result was the best we achieved in 2010. I came seventh, while my team mate then, Nick Heidfeld, finished eighth. Before that I had very little experience in Suzuka, and I was an F1 rookie. So I hope I can have an even better result this year. For the fans I hope we have nice weather. I think with DRS and KERS there is a good chance they will get to see a great show again, and it would also be a perfect venue for the drivers' championship to be decided. It is a proper race track, the karaoke parties are legendary and, again, it would mean really positive coverage for Japan."