"Happy to have done my job," says Ricciardo 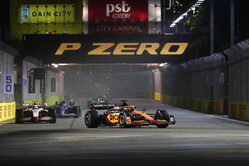 Even though such weather conditions often prove to be the great leveller, starting the Singapore Grand Prix from 16th didn't really offer much in the way of prospects for Ricciardo, who has yet to find a berth for next season.

However a strong start and his experience of the track and such conditions saw him gradually work his way up to tenth.

While the majority of his rivals began pitting on Lap 33, Ricciardo and his teammate stayed out, and lo and behold, now running third (Norris) and fifth, when the Safety Car was deployed on Lap 36 after Tsunoda had gone into the barriers, both Woking drivers took advantage of the 'free' stop., rejoining in fourth (Norris) and sixth.

Verstappen's off on Lap 40, allowed his former teammate to move up to fifth where he remained for remainder of the race, despite losing ground to Norris in the final laps.

"I feel it was a 33-year-old drive," he subsequently told reporters. "In terms of just being like, you know, at times I didn't have always the pace as the track started to dry.

"On the inter I was like, starting to get a bit antsy, like 'guys, I'm not that quick right now, let's put a slick on and just see what it does'. But then it was like, okay, it's kind of a sporadic or emotional decision, so we kept the conversation going and I think that's ultimately what put us in a top five position.

"It's not often you come from 16th to fifth here, so I'll take it," he beamed. "This and Australia, I had fun in Australia, too. It's nice to get a good one at home."

The Australian admits that the game-changer was opting to stay out when everyone else was pitting, a decision he admits was down to the team.

"At one point, honestly, I left it to them," he said. "We were talking a bit about the slick, and the track, and where it's dry, where it's wet. "Tom (Stallard) was giving me information about Gasly and he said he's still a bit slower here and here and there; this sector, that sector.

"So obviously they had way more information," he continued. "I was giving track conditions, I was saying it's still quite wet, like the places where it's wet, it's still very wet.

"I remember, I think between Turn 13 and 14 on that back straight, I think at one point I just said 'I'm going to leave it with you guys, whatever you think is best'. A few corners later, Tom said 'look, we're still quicker than Gasly, I suggest we still stay out. And I said 'let's do it', and obviously that bought us time to allow a Safety Car."

"There's a lot of positives to take from today," said Ricciardo. "You've got to cash in. It's one of those days where it's unlikely we get another big day like this when Alpine don't. I'm just happy that we cashed in when we could have, should have, and finally both sides of the garage.

"Obviously I'm aware that the championship situation and the lack of points I've been able to get this year, it's certainly been pretty sad," he admitted. "So to contribute on a day when we certainly needed to, obviously with both Alpines retiring, that was big for us.

"Happy to have done my job."