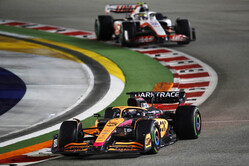 Lando Norris: "A very good day, with both cars in the top five. It was a tough race, especially with the conditions, but the whole team did a great job today. We scored a lot of points which was so important for the Constructors' Championship. Well done to the entire team. I'm very happy."

Daniel Ricciardo: "I'm very happy. I haven't had a top five all year so I'm very pleased with that. I feel like some things fell in our favour today, but I also think we were very patient and mature. It was very tempting to jump on a slick and try to be a hero in the position we were in – but I think we were just sensible, bided our time and that obviously allowed an opportunity with other cars, and then a Safety Car. I'm really pleased the first lap was good, we made some positions there as well. So, we did everything right. We maximised a top five and it was a big one for the team in the Constructors' Championship, so everyone's got a smile on their faces."

Andreas Seidl, Team Principal: "Twenty-two points. Back in the game! Thanks to the entire team for delivering an excellent result this weekend, in hot, humid conditions here at the track in Singapore, back at the MTC and our colleagues at Mercedes HPP. Daniel and Lando both had superb drives today in tricky conditions. They did not put a wheel wrong on a day when many of their peers went off – but equally they benefitted from great teamwork and clear communication from their strategists, engineers and the pit crew, who once again delivered.

"We made the right calls today when it was very tricky to judge the best course of action. While we were in a good position from early in the race, in these conditions and particularly on this track, it is always tempting to jump early, switch to the slicks and try to grab even more. We had patience, two reliable cars, and solid pitstops, all of which were crucial factors in the result today. Special mention for Daniel. From P16 to P5 is a magnificent achievement. Both he and everyone on his side of the garage have worked so hard and shown so much commitment this year, it makes me very happy to see his best result of the season so far.

"Beyond the result, the upgrade that we ran on Lando's car worked as we expected, which is a big positive. We're looking forward to it being fitted on both cars in Japan.

"We won't get carried away with the result today. It's good to be back up to P4 in the Constructors' Championship but we're in a tough competition with a very strong Alpine team. We'll keep our heads down and keep working hard until the final lap in Abu Dhabi... but first up, Suzuka!"