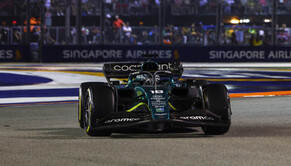 Lance Stroll: "It feels so good to pick up sixth place tonight, which is my best result of the season. It was also a good day for Seb, so we have come away with a big bunch of points. That is great for everybody in the team who is working so hard. It was a tricky race: the track surface was very slippery for the whole race, and it was not easy to stay out of trouble. It took a very long time to dry, just as it did yesterday. It was just a case of waiting for the areas with the new asphalt to dry out before the switch to slicks, which we timed really well. We have moved up in the teams' championship, which is important and a nice boost as we enter the final part of the season."

Sebastian Vettel: "I think we can be happy with a strong result for the team and scoring important points. It was not easy with some very difficult track conditions. The asphalt took a long time to dry and timing the switch to dry tyres was critical. Maybe we went a lap too early, but overall I am happy with the result. I had a very strong start to the race and the first lap was great fun. I was not very patient and I pushed really hard, and gained a few places. After that, I concentrated on looking after my Intermediate tyres because we knew that the track would take a long time to dry and they needed to last. I had a big battle with Lewis [Hamilton] and Max [Verstappen] in the closing laps. I was defending for many laps and it was a shame that Max got ahead of us on the final lap."

Mike Krack - Team Principal: "Lance drove fast yet patiently to sixth place, scoring an excellent eight World Championship points for us; Sebastian, finishing eighth, added four more, pipped for seventh on the final lap by a hard-charging [Max] Verstappen. On a very slippery track surface, both our drivers handled an extremely tricky task superbly. As a result, we have climbed a couple of places in the Constructors' World Championship, which is a welcome reward for the steady progress we have been making recently. As ever, Formula One is a team effort, and in particular I want to pay tribute to our mechanics, who have worked long and hard in very humid conditions over the past few days, and executed our pit stops brilliantly this evening. I also want to thank the team back home at Silverstone, who also did a fantastic job. From here we go to Suzuka, a very different kind of circuit, and we hope to maintain our forward momentum there."