Extended FP2 at Suzuka to allow for tyre testing 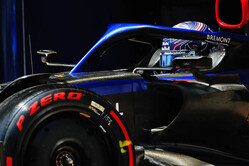 The second Friday practice session in Japan will be extended to 90 minutes in order to allow the teams to work with Pirelli on the 2023 tyre compounds.

There will be a second extended session two weeks later at the Circuit of the Americas as Pirelli develops its 2023 compounds with an eye on some of the problems, including the tendency to understeer, encountered in the first season of 18-inch tyres in F1.

"The plan is to test mainly compounds," explains Mario Isola. "We have the opportunity to use FP2, that will be 90 minutes and not 60.

"All 20 cars will be running different plans," he continues, "as usual, they are blind, so teams are not going to know what they are testing.

"It's really important for us," he admits. "It's important to find new opportunities of testing because with such a busy calendar with the 24 races next year, it will be, I don't want to say, almost impossible to find the space.

"The European season is shorter, to stay on track Tuesday and Wednesday after the race is difficult, and so we need to find new opportunities.

"The teams were very collaborative in finding solutions, and one solution is to test during free practice."

Of course, the two 'tests' come at a point in the season where the various battles for position are reaching a climax, then there's the little matter of wear and tear on components in the extended sessions.

"It's a big effort from them because they are fighting for the championship and they are going to lose one session," admits Isola. "But it's really important for us to provide a product next year that is even better compared to what we have this year.

"We are happy with the current product, but we know that teams are developing the cars, performances are increasing. We need to reduce a little bit the understeer, we need to fine-tune a couple of compounds.

"And we need the final validation on track to be sure that we are going in the right direction to have even a better championship next year."

In a bid to cause the teams as little disruption to their usual programmes as possible, Pirelli is spreading the test across all ten teams.

"We are planning to give them our run plans with a mileage that is similar to what they have during a normal FP2," says Isola. "We will run the same number of laps with blind prototypes.

"So working with the teams, we're trying to find a clever solution in order to give us the possibility to test and not disrupt too much the weekend for them."