Ferrari continues to set the pace in Hungary 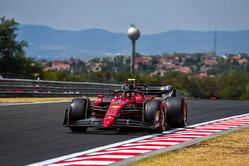 Ahead of today's second session, the air temperature is 33 degrees C, while the track temperature is 50 degrees. It remains hot and sunny but we are expecting rain tomorrow and altogether cooler conditions on Sunday.

All of which explains why this morning's session was busier than usual.

Attracting a lot of attention is the new rear wing on the Aston Martin which is widely seen as an attempt to recreate the down force levels pre this year's regulation change.

The biggest upgrade package is at Haas, where Magnussen has a new floor, engine cover, cooling louvres, rear suspension and rear brake winglets. However, in the opening session it appeared to make little difference.

Sainz set the pace, ahead of Verstappen, Leclerc, Norris, Russell, Perez, Hamilton, Ricciardo and the Alpines.

Having handed his car over to Robert Kubica earlier, Valtteri Bottas is back in the Alfa Romeo this afternoon.

The lights go green and, as was the case earlier, Vettel leads the way, followed by Stroll, Magnussen, Bottas, Zhou and Perez. Most are on mediums though Ricciardo and Ocon are on hards.

In no time at all, there are 19 drivers on track, with Hamilton the only 'no show'... at which point he too heads out. The Williams pair opt for softs, the only drivers to do so.

Of the first wave, Leclerc goes quickest (18.911), ahead of Verstappen, Alonso, Sainz, Perez and Albon.

On mediums, Magnussen goes seventh with a 20.796, though he remains 1.8s off Leclerc's pace.

Sainz runs wide at Turn 5. Currently the stewards appear to be turning a blind eye to track limits violations but that will clearly change over the course of the weekend.

Currently 15th, Russell heads out on softs, however his lap is compromised after Albon spins and goes off at Turn 1 thereby bringing out the yellows. "How's the tyres?" he is asked. "They're gone," he replies.

Sainz improves but cannot overhaul Norris' time, while Verstappen's 18.728 is only good enough for fourth.

Perez stops the clock at 19.397 to go eighth, while Russell complains that he cannot get around Turn 1 without locking.

Despite the raft of updates, Magnussen remains 16th, only just ahead of his teammate, 1.373s off the pace.

Lots of expletives from Gasly as he struggles with an anti-stall issue.

With 16:00 remaining, Norris switches to hards, as does Ricciardo, while Sainz and Verstappen are on mediums.

Told to pit, Leclerc asks if there is a problem. "We're just checking something," comes the somewhat anonymous response.

"These oscillations in Turn 4 and 11 are a joke," complains Vettel, though he isn't laughing.

As he drives out of his garage, Leclerc runs over a jack that has been left on the floor.

Vettel has completed the most laps (23), ahead of Bottas, Stroll, Latifi and Tsunoda who have all completed 23. Hamilton and Albon have completed the least (18).

On the longer runs, Leclerc is setting an impressive pace, as is teammate Sainz.

As the clock counts down, all bar Albon are on track.

Told to be careful with the car to "protect parts", Norris replies: "I am! If I'm not, tell me where I'm not, I'm just doing what I'm doing."

On the face of it, Ferrari appears to have this one in the bag, but at the same time, with an eye on the weather tomorrow and Sunday is Red Bull playing the long game?

While Mercedes is struggling, McLaren is looking strong, but as ever we don't know what the fuel loads were.

What we do know however is that after the long, long wait Haas must be feeling somewhat unimpressed with that upgrade.

Check out our Friday gallery from the Hungaroring here.