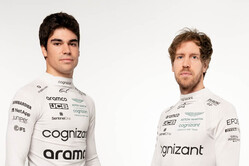 Lance Stroll: "It would be fantastic to come away with a good result this weekend after a difficult first half of the season. The Hungaroring is a great track with some really fun corners and I generally enjoy driving here. It feels a lot like a kart track in a lot of ways; the corners are relentless and quickly flow from one to another. We have shown that we have improved race pace and we want to carry greater momentum into the summer break and the second half of this season."

Sebastian Vettel: "Hungary has become the traditional end-of-summer race before the break, which makes it important to get a strong result before the shutdown. It is a tricky little circuit - everyone thinks of it as a low-speed track, but it has some fast corners round the back that require plenty of attention. We had a good race there last year, and I think the venue should play to the strengths of our car so I am looking forward to a positive weekend."

Insight and Speed with Cognizant

Overtaking: The Hungaroring is one of the toughest circuits to pass on in F1. The key overtaking points are down into Turn One or Two - 94% of overtakes occur there. DRS is also hugely beneficial down the long straight into T1, with 86% of passes assisted by it.

Strategy: Pirelli is bringing the C2, C3 and C4 tyres for the second weekend in a row. Despite high tyre degradation, this is usually a one-stop race due to the importance of track position. However, there can be room to switch to a two-stop strategy if the opportunity presents itself.

The chance of a mid-race Safety Car is less likely than it may appear. The past five races have only had very early interventions. The Virtual Safety Car has only been used twice - both in 2018. This makes it difficult to incorporate Safety Car interventions into race strategy.