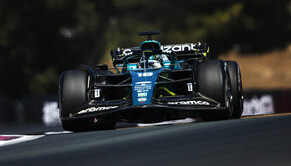 Lance Stroll: "We had a great first lap today that set us up to have a great race. I nearly got [Esteban] Ocon in Turn Nine as well, but it was important to have such a good start. I felt I had some momentum in the closing stages to possibly catch [Daniel] Ricciardo. We are continuing our trend of being more competitive on a Sunday so today is a good platform as the summer break approaches. I had a snap on the exit on the last lap because I was struggling with my tyres at the very end. It was a good fight with Sebastian, but the most important thing was to bring a point home for the team today."

Sebastian Vettel: "My afternoon was frustrating. I was stuck in traffic for the whole race - but you expect that when you start in the midfield. And, with the strategy, I do not think there was really much more the team could have done there. It is clear that we need more grip. In the race, things were not too bad - the cars ahead of us were not disappearing - and we also understand the car a little bit more after this weekend. I had a chance to pass Lance on the final lap; I was a little bit faster but we are not fighting over one point - it is the same net result for the team. It does not make any difference."

Mike Krack - Team Principal: "Lance made an excellent start from his P15 grid slot to climb to 11th early on, just behind Sebastian in 10th. Lance then passed Sebastian later on the same lap, and they ran in close company more or less throughout the rest of the race. We decided on a one-stop strategy for both drivers, but we did not want to risk stacking our drivers' tyre stops during the Safety Car period triggered by [Charles] Leclerc's accident because the pit lane was extremely congested at that point and we would have had to hold Sebastian for too long. Despite rear tyre degradation in the last third of the race, Lance did well to hold on to 10th and thereby score a hard-earned point, with Sebastian just behind him. A double points finish would have been great, but it was not to be. Even so, our race pace was decent and our reliability was good, and that is a solid basis to take forward to the Hungaroring - a circuit that we think may suit our car better than Paul Ricard. Last but far from least, on behalf of our whole team, I want to express our deepest sympathy with the family and friends of 18-year-old Jake Pedley, one of our apprentices, who tragically lost his life in a road accident on Tuesday."

Check out our Sunday gallery from Le Castellet here.