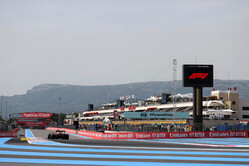 "We've been talking about how well they have been getting on," he told the F1 Nation podcast, referring to title protagonists, Max Verstappen and Charles Leclerc. "I think that first corner is a bit tricky, the little chicane thing. Let's say Charles loses his front wing or Max gets a puncture or something like that. Or maybe even on pure pace the Mercedes springs a surprise.

"I think in their race trim, Lewis has been on occasion, very, very quick," insisted Hill. "It could even be Lewis first, George second and Carlos Sainz third."

Just a few races ago such a scenario would have been unthinkable, but with Hamilton's back issues seemingly resolved, along with the Mercedes' bouncing, maybe the former Williams driver is on to something.

We've seen in the last couple of races that the Mercedes has pace, while the seven-time champion has lost none of his guile. Another factor, assuming Mercedes is on top of its bouncing issues, is reliability.

Aside from George Russell's first lap crash at Silverstone, the W13 has been bulletproof this season, which is more than can be said of the Red Bull and Ferrari.

Though, Sergio Perez' retirement in Austria was down to accident damage, so far this season Red Bull has suffered two other DNFs courtesy of a fuel system problem in Australia and gearbox issue in Canada.

However, Red Bull's woes pale into insignificance when you consider Ferrari's three engine failures, the most recent of which was in Austria where we witnessed Carlos Sainz' car literally go up in smoke.

Indeed, in the final laps in Austria, while Verstappen was hampered by tyre degradation, race leader and eventual winner, Leclerc was suffering a brake issue. So nervous was team boss, Mattia Binotto that the Italian subsequently admitted to not watching the final three laps of the race.

Paul Ricard is one of those circuits that has a little bit of everything: fast corners and flat-out straights as well as slower and more technical sections. All of which places medium-severity loads on the tyres, which is why it makes a good test track.

Furthermore, at 12 metres wide, there are plenty of options when it comes to lines and overtaking: all providing an interesting challenge for the drivers.

The Mistral straight - named after the famous French wind, which can also disrupt the aerodynamic balance of the cars - has the potential to cool the front tyres down, which can affect the turn-in at Signes immediately afterwards, this being the most demanding corner of the entire circuit, taken flat-out.

Following the shenanigans in Austria, going off track here is definitely to be avoided, not so much due to over-zealous officials but because the distinctive red, white, and blue markings contain a high-friction material designed to slow cars down quickly, with high risk to flat-spot the tyres.

Last year's winning strategy was a two-stopper from Verstappen, a brave gamble as he was the only frontrunner to stop twice, with those behind him stopping just once. However, it paid off as the Red Bull driver took the lead again a lap before the chequered flag.

While the upgrades were few and far between in Austria, we are expecting a number of teams to feature them this weekend. For a start, both Williams drivers will have the upgrade package that was only available to Alex Albon in Britain and Austria, while Mercedes and Alpine are also expected to be bringing significant packages.

The circuit has been regularly resurfaced with fresh tarmac and provides a high grip level compared to other tracks. Plus, the tarmac is very dark in colour, which is why it gets so hot in the sun and can reach temperatures approaching 55°C, one of the year's highest figures.

Featuring an extremely smooth asphalt, smooth tarmac also means that though tyres don't wear out as quickly, they are much more difficult to warm up - though the normally high temperatures should help.

Although the track is generally very smooth, there is one heavy bump. Turn 5 was remodelled for the 2021 race with the intention being to make it a slightly banked entry towards the apex, similar to Turn 4 in Austria but in the end there is now a bump where the track drops away from the car between Turn 4 and Turn 5.

Of the 15 turns, 6 are left-hand and 9 are right-handers. Many of the right-hand corners are long sweeping turns, which puts a great deal of stress on front left tyres.

With the aforesaid reliability remaining the main question mark, we expect this to be another Red Bull v Ferrari battle, with Mercedes all too eager to pick up the pieces.

In the wake of Austria, Perez and Sainz will need to have good weekends if they are to keep their championship hopes alive, though in all honesty both appear to have already lost out in this department.

One of the high points in Austria was the five-way battle featuring the Haas drivers, Guanyu Zhou, Fernando Alonso and Lando Norris.

This, coming just days after the three-way thriller featuring Hamilton, Leclerc and Perez at Silverstone, was clear proof that the 2022 regulations overhaul is working... to an extent.

Consequently, other than the fight up front for the titles, expect more fun and games in the midfield, where Haas is now looking to join the fight for fourth between McLaren, Alpine and Alfa Romeo.