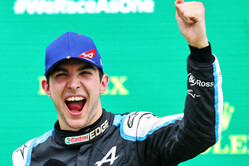 One year ago, Alpine, and Esteban Ocon, claimed an historic first victory in Formula 1 at the Hungarian Grand Prix after a thrilling, incident-packed, race at the Hungaroring.

After its double points at home in France, the team looks ahead to this weekend's Hungarian Grand Prix looking to continue its momentum as Team Principal Otmar Szafnauer explains.

How pleased was the team to claim points with both cars from its home Grand Prix?
Otmar Szafnauer: "It was not a straightforward weekend as the hot conditions proved for everyone. After a challenging Friday, where we were not particularly competitive, we worked well as a team, in a clear direction, and found good improvements on Saturday. By the end of Qualifying, we were well set for the race to be in a position to score well with both cars and, importantly, beat McLaren, our direct rivals, who have brought some interesting upgrades and upped their competitiveness. Our race pace again looked strong, and we know that's when it all counts for points. Fernando executed a faultless race. A good start to jump Lando [Norris] was our game plan and from there he managed everything supremely well, as he always does. Esteban did a good job to put behind a tricky Friday for him and make a step in performance to come away with a deserved four points after a couple of nice overtakes on Daniel [Ricciardo] in the other McLaren. Home race, double points with the team up to fourth in the championship... that sounds a job well done to me!"

Last year, the team won its first Grand Prix as Alpine, what might be possible this year?
OS: "It's an exciting time to return to Budapest, the location of the team's first win at Alpine. At the time, in my former position, I was a direct rival of Alpine that day and I remember it being a fascinating race. I was extremely happy for Esteban on the victory and it goes to show that you can never say never in Formula 1 and that makes this sport so fantastic. Anything might happen and you have to always apply that 'never give up' attitude in order to be successful. Who knows, it may happen again, and we'll aim to be in a position to seize any potential opportunities up front this weekend. The team will enjoy its return to Hungary with some fond memories to reminisce."

How would you assess the first part of the season with an eye on the summer break?
OS: "We are reasonably satisfied with the first half of the 2022 season. Coming into the year, there was a sense of heading into the unknown with the change of regulations, different looking cars and the ambition of harder and closer racing on-track. I think there's more to come in terms of achieving the ultimate objective of wheel-to-wheel racing, corner after corner, but, we've seen some excellent races at the majority of Grands Prix. In terms of our performance, we're in a strong position to achieve our season aim of being fourth place in the Constructors' Championship. Regularly, we are the fourth fastest car, even if we have not extracted or shown that potential as much as we'd have liked.

"That said, we are learning and developing the car at a fast rate, which is thanks to the hard work of everyone at the team across Enstone and Viry to ensure we're making progress towards the front. I firmly believe we will achieve our goals by the end of the season. Right now, though, our focus is on this weekend's Hungarian Grand Prix and backing up our good result in France last weekend. We want to enter the summer break feeling pleased but also motivated to turn the screw in the Championship come Belgium and beyond."

Where can the team find further improvements in its bid to meet its season objective?
OS: "Firstly, we must continue our high rate of development and bring regular upgrades to the car. We have a timeline for development and we're doing a great job in meeting our milestones on that front with some decent parts to add to the A522 still to come. We don't tend to dwell on the 'ifs, buts and maybes', because the results on-track make the greatest hyperbole. We have not put together too many clean weekends for various reasons, which has cost us valuable points at certain times. We must unlock the maximum potential at each Grand Prix and that is down to us, each and every individual in this team, to contribute to that effort. We're doing a good job and we must continue working to a high level."

A year on from his maiden victory in Formula 1 and Esteban Ocon returns to the site of his biggest triumph. After securing some more points at his home Grand Prix in France, Esteban is keen to enjoy another strong weekend at the scenic and memorable city of Budapest.

A satisfying home race for the team, how do you look back on your French Grand Prix?
Esteban Ocon: "A double-points finish for the team on Sunday was the aim, so we are definitely happy to have achieved that in front of our home crowd. What is more, we're now ahead of McLaren in fourth place in the Constructors' Championship, something the team no doubt deserves. The hard work of everyone at the track, at Enstone and Viry is paying off and this is proof that we are moving in the right direction. I'd like to thank again all of the fans who came out to support the team all weekend. They were amazing and it's definitely a home Grand Prix I'll remember for a long time. It would be difficult to see an F1 calendar without a Grand Prix in France, a country with so much motorsport heritage, so I really hope we will be racing in front of our home fans next year."

We're back in Budapest this week and all the memories that come with that. How are you feeling ahead of it?
EO: "I feel good, and it will be emotional to be back in Budapest for sure. I can already feel all the memories of last year coming back. But that was last year, and we need to be fully focused as a team to deliver another solid weekend. It will be important to go into the shutdown with a feeling of having really cemented that fourth spot in the Constructors' Championship. We know it will be difficult, but we have the team and the tools to do just that. We will be giving it one last push before a well-earned break for the team who have worked incredibly hard all year."

We know Budapest is one of your favourite tracks. What do you like most about it?
EO: "I do really enjoy the track and it's one of my favourites, and not just because I won there! I like the second sector and how fast and flowing it is. It seems you don't get a break from turn four to turn 11, and if your set-up is good that sequence of corners can feel really nice and make you feel like you're extracting the maximum from the car. It's a really fun track to drive. But overtaking is perhaps not as easy as other circuits, so a good performance in Qualifying will be key for all teams. I also really enjoy Budapest as a city. It's always a pleasure going back there, and we will aim to finish this first half of the season strongly."

Fernando Alonso returns to Budapest, a city he knows well having secured his first-ever Formula 1 win there. Ahead of the upcoming summer break, this weekend the Spaniard will look to extend his current points streak to eight top ten finishes in a row, at the twisty and technical Hungaroring.

Sixth place in France and another set of points. How was the weekend for you?
Fernando Alonso: "It was a good Sunday for us after a challenging weekend. We found it quite tricky to find the right setup during Practice and we weren't quite happy with the balance until just before Qualifying. However, we showed that when we can have a clean weekend, to aim for the top
seven positions is a very realistic goal for us as we were pretty comfortable in the race. We managed our pace and tyres very well and executed a good game plan. It was special to see the level of support we have by the French fans, they made us feel very loved all weekend. Let's hope we can keep up our form again this weekend in Hungary and go into the summer break in a positive mood."

You have a lot of memories in Budapest, can you pick out a favourite?
FA: "Obviously it was where I took my first-ever win in Formula 1. We had a good car that year and we were building something very strong towards the next few years. But, we weren't expecting a win that year. I think we found the circuit to really suit our package. Of course, there was last year too, which was Alpine's first-ever win. The race also tends to be fall around my birthday, so it's a good weekend for me with lots of memories and hard to choose one. It's a fun track and a real challenge as a driver, with its tight and twisty nature. Overtaking is very difficult, but let's see if it's any different in these cars. Qualifying will as ever be very important there."

Another milestone down having now completed the most laps raced in Formula 1 history. Is it motivating you to continue to break these records?
FA: "I knew about this one earlier in the weekend. For sure it's nice to break these records and there are more records to break. I don't have them front of mind but it's nice to see my name alongside and ahead of some of the greats of the sport. Longevity is a very difficult thing to achieve in the top category of any sport, you have to keep discipline, focus and hard work. However, there are always more things to achieve in the sport!"